Bright-eyed, blonde haired members of Britain's up and coming Nationalist Socialist Party (BNP) reacted with fury today as a mad Jew described them as 'odious' in a reprehensible opinion piece printed in England's third most popular newspaper.

Despite being an ardent supporter of BNP policy and spending the past eight years recruiting new members into their ranks by fearlessly and tirelessly exposing the totalitarianism of New Labour and the tyranny of multiculturalism, Melanie 'Malevolent' Phillips whipped up a storm by appearing to criticise the cuddly, overly sensitive supporters of EU legislation.

Commenters were livid at Phillipses's U-turn over important issues like immigration and the free reign given to brown terrorist hoodies, as she inexplicibly launched a vile tirade against the crusading, charismatic party she had appeared to side with for so long. 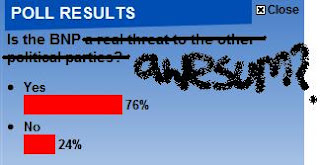 John, from London, England, expressed weariness at Mel's incessant liberal agenda with an angry flurry of apostrophe's: "Not another, the BNP are all racist's, fascist's and nazi's outburst from Melanie. These attacks on them are really becoming rather tedious" he sighed. 812 readers agreed.

D Wallace from Birmingham summarised succinctly just why the BNP is so popular with Daily Mail readers: "The reason people are flocking to the BNP is simply because they represent what the people feel, and want, not what successive governments have told, or forced them to accept." 763 readers confirmed that this was true.

Jennie from London demanded an explanation for Mel's absurd description of the BNP as 'odious', before throwing the label back at the LibLabConspiracy that have destroyed our culture: "I would think that the antics of the mainstream Parties over the last 50 years could well be described as 'odious'". 710 readers also wanted to hear Mel's justification for being so mean.

Texan Alan Preen took the pillowcase off his head long enough to write: "Do you seriously consider the BNP to be a worse choice than the lying, cheating labour rabble." 813 Mail readers found his clever rhetoric hilarious and gave his post the thumbs up.

Stephen H Print from Thailand (presumably on holiday) begged Mel not to judge his favourite party quite so unjustly: "No don't condem the BNP for standing up for Briish culture and values that this totally discredited government with an unelected leader work so determindly to destroy" 616 Mailites were similarly hurt by Mel's 'condemation'.

Gary from London, meanwhile, revealed his classical education with a quip Plato himself would have marvelled upon: "Well that's how deocracy works isn't it ?", he said smoothly, while 318 other readers were dazzled by his wit and knowledge of the little-understood laws of 'deocracy'.

Rick from Newcastle summarised the BNP's rise in popularity with the all the linguistic apptitude of an early 20th Century German political leader: "The BNP are the only party standing for Britain and British people.
The labour and the tories have sold our country out..
Where is our Referendum.
Where are our Freedoms..."
...he said, jabbing his finger at an imaginary crowd, his moustache twitching with passion. 679 other readers' taches twitched in support.

Jake, from London, along with 562 friends, had trouble seeing where the trouble was: "I see no evidence that the BNP are odious thugs", before detailing his drive home through winding country roads, "I'm ready for a lurch to the right", he belched.

Michael from Yorkshire, ENGLAND, gave Mel an impromptu history lesson: "I honestly think that the BNP is a natural part of political evolution. History...... ( from ancient Rome onwards ).... is littered with examples of the extreme measures ordinary people will go to - when they feel impotent to change anything. Watch the BNP...... it will be interesting to witness politics entering a new era. It had to happen...it may do a lot of good." 524 readers thanked Michael for sharing his knowledge, but still laughed at the word 'impotent'.

But it wasn't all a big BNP friendly, happy get together, as some ignorant 'libruls' attempted to ruin the fun with their personal brand of multicultural fanaticism.

Emma from London sneered: "Can you imagine this country being run by this bunch of cowboys? What are they going to do once they've got rid of all the non-English people?", but, thankfully, 546 Mail readers slapped her down and told her to go home.

Mark C from East Yorkshire yelled uncontrollably: "There is no room in British politics for extreme right-wing, small parties like the BNP", before being booed off stage by 468 red arrows.

Shifty sounding Dan Hollingsworth from Rickmansworth said facetiously: "To all the comenters miffed about being called racists or bigots: Really? Have you not researched your party?", but was rightfully put in his place (behind the corner shop) by 356 real Brits.

Ed from London appeared to have wandered into the wrong room, bleating: "Reading the comments here makes me feel quite uneasy. I hope the extreme-right views doesn't represent Britain as a whole. As a British/Italian Jew I would be probably in a very unstable situation with the rise of a Nazi party. I better start doing something about my brown hair and olive skin before is too late, I say."

347 Daily Mail readers agreed that, yes, he should start doing something about his tell-tale impure brown hair and distasteful olive skin, and voted his comment down for showing such arrogance in admitting he's a foreigner who came over here and took things.
Posted by D. Quail (expat) at 21:24