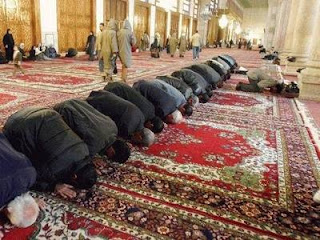 Fears that the BBC is to become little more than a 24 hour Salaat service were mounting today, after the state funded broadcaster appointed a Muslim as its new head of religious programming.

The appointment of bearded Aaqil Ahmed comes at a time of deepening worries among Christian leaders that their faith is being sidelined and downgraded by brown people.

Last year the BBC gave the job of producing its most popular and longrunning religious programme, Songs of Praise, to a Sikh, Tommy Nagra. Although we don't watch Songs of Praise, we are willing to bet that traditional English Christian verse has been replaced with Bollywood style love songs and choir boys are forced to dance around turbans.

Mr Ahmed is currently senior executive for religious programmes at liberal broadcaster of soft-core pornography Channel 4. He has commissioned series on the history of Christianity and the Koran - the Muslim book of jihad and halal.

Critics have accused him of dumbing down religion in his post at C4. In one programme an assessment of the state of Christianity was presented by Cherie Blair.

Mr Ahmed is a trustee of the Runnymede Trust, a body that has championed the pernicious ideology of multiculturalism.

The Church of England points out that 70 per cent of the population of Britain professes to be Christian, while only 3 per cent are Muslims.

Sallow eyed columnist Stephen Glover said: 'The BBC does not like God, unless perhaps it be a Muslim, Hindu or Sikh version.'

He added that the appointment of Mr Ahmed was evidence that 'the Corporation has been increasingly pursuing what can only be, at best, described as a non-Christian agenda and, at worst, as an anti-Christian one' for allowing people who don't believe in Yahweh to be on TV.