Conquisting over here, taking our bancos 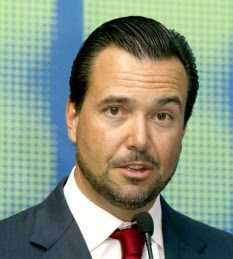 The move, described as a 'takeover of the highstreet' by wingnuts, marks the end of a glorious era of British banking and a further erosion of traditional high-street names by Johnny Foreigners buying out once proud English institutions to rebrand with silly exotic names. We haven't got any other examples of this, but we're fairly sure it's happening.

Around 1,900 jobs have already gone since Santander acquired the three banks, as efforts to combine them have led to redundancies of British staff untrained in bull fighting and sangria making.

A sombrero wearing manager said: 'Eh heh heh, thees estúpido Engleesh don'know how to run they bancos properly, eh? So we take a them away and name them after beeg ceeties of our contree, haha!'

Santander has expanded aggressively in the UK over the past five years, exploiting the banking crisis as an opportunity to mercilessly buy up struggling British rivals.

The rebrand has led some commentators to call for the complete end of capitalism in a 'back to basics' approach that would see goods and services exchanged through a barter system last seen in the good old days of prehistory: