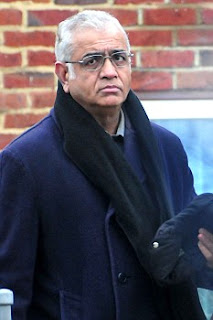 Yet another Muslim has launched a discrimination claim against his employer for asking him to do something perfectly normal that no ordinary English person would object to - probably just to offend YOU.

Money grabbing Hasanali Khoja, 60, claims that being asked to cook sausages at his job with the Metropolitan Police amounted to 'religious discrimination' - because Islam 'forbids' its adherents from handling pork.

But when bosses at the West London station where Mr Khoja worked offered to let him wear gloves and use tongs while preparing traditional '999 breakfasts', he refused, alleging that he still wouldn't be protected from splashes of fat.

'The reason for this refusal is because of the fact it is well known that if you are cooking bacon or sausages, which I was asked to do, I was exposed to splash and contact with pork which I object to. Gloves and tongs would not make any difference', he whined.

Mr Khoja also says he was greeted with derogatory gestures and face pulling when he raised concerns over the handling of pork, and no attempt was made by human resources managers to find a resolution to the situation. He had previously been assured during an interview for his post that he would not be required to cook bacon or sausages.

The story was originally reported in virtually identical form over 6 months ago, leading commenters dumbfounded that somebody could stick to their absurd religious 'beliefs' so annoyingly: 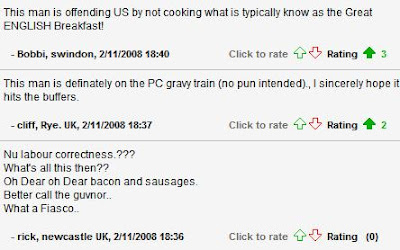 Respected columnist Richard Littlejohn agreed, asking: 'Whoever heard of a chef being excused pork?' before adding hilariously: 'Naturally, [Khoja] now wants a large sum of money by way of com-pen-say-shun'.

It remains unclear why Littlejohn is unable to write words containing more than four syllables without spelling them phonetically. A sauce said: 'He really is just that thick'.
Posted by D. Quail (expat) at 16:18