The British Association for Adoption and Fostering are 'Nazis' for encouraging gay people to adopt, The Daily Mail said yesterday.

The tasteless attack by Steve Doughty, who also hates foreign people, came after the BAAF branded The Mail and other gay parenting critics 'retarded homophobes', despite the mountain of evidence suggesting that gay parents are really bad and probably just paedophiles looking for easy targets.

In 2006, gay foster parents Craig Faunch and Ian Wathey were jailed for paedophile offences against boys at their home in Pontefract, West Yorkshire.

And earlier this year a fierce controversy was manufactured by the tabloids when a Scottish couple said they were warned they would never see their two grandchildren again unless they dropped their opposition to them being adopted by a gay couple. Two gays subsequently stole their children. 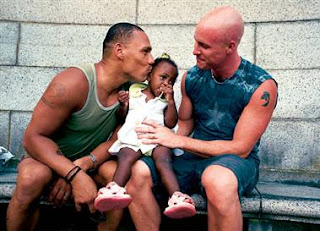 The 'retarded homophobes' tirade was published in the BAAF's Pink Guide to Adoption for Lesbians and Gay Men, written by Nicola Hill - an ex writer for the left-wing, homosexual-loving, sandal-wearing, tea tree oil drinking Guardian newspaper.

But the remark angered journalists at The Mail, which campaigns tirelessly for politically correct language to be upheld at all times.

Some gay sympathisers suggested that The Mail's 'Nazi' slur was in fact worse than the original 'retard' insult, and that the newspaper was guilty of presenting an extraordinarily biased opinion on the gay parenting debate.

Author Patricia Morgan, who has published a study of gay adoption, said: 'It is disgraceful that they do not wish to discuss the pros and cons of gay adoption. They just go in for abuse. They do not appear interested in evidence about the outcomes for children. And it is a disgusting phrase to use.'
Posted by D. Quail (expat) at 00:46