In a moving interview, Britain's next Prime Minister has revealed the toll that being the country's top Tory has taken on his personal life and mental faculties. 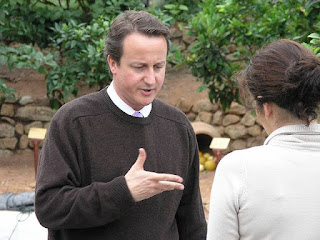 Discussing his 'common man' credentials with The Times, David Cameron seemed flustered and confused, pausing for long periods to imagine what being worth less than £30m might feel like.

Asked how many properties he owns, he replied assuredly: 'I own a house in North Kensington...and my house in the constituency in Oxfordshire and that is, as far as I know, all I have.'

Pushed to discuss a house in Cornwall, Cameron went on to bluster: 'No, that is, Samantha used to have a timeshare in South Devon but she doesn’t any more,' and asked to confirm that he didn't own a fourth house as well he replied decisively: 'I don’t think so – not that I can think of.'

Talking to The Quail from his ivory tower, the former Bullingdon Club member said: 'On the whole, I think that went well; having admired John McCain's interview technique during his presedential campaign, I thought I'd take a leaf out of his book on the property thing. It's a sure fire recipe for success.'
Posted by D. Quail (expat) at 15:56