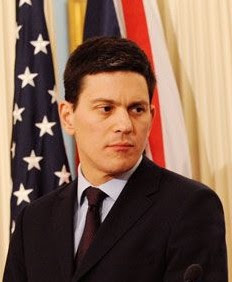 Unable to contain his Cromwellian excitement at the prospect of banning Christmas this year, David Miliband has already ordered 'Foreign Office mandarins' to begin planning the cancellation of Britain's favourite festival - possibly to replace it with Eid or some other oriental pagan heresy.

The review of state endorsed religious celebrations comes after it emerged that Miliband sent out Ramadan and Rosh Hashanah messages to Embassy staff around the world, but neglected to prepare one for Christmas Day or Easter. He also hates St George's Day.

It is thought that Miliband, who once openly admitted that he doesn't believe in God or Santa Claus, issued the dictat 'to avoid upsetting different faiths and nationalities' like bearded Muslim jihadists and Scientologists. A local man said: 'What about my rights? He'll execute the tooth fairy next, and give all the teeth to those Talibans'.

The news comes a full seven months before Christmas, the earliest recorded banning of the Christian festival since history began when Jesus made the Earth in 1,500 BC.

Last year, Christmas survived until mid September, when it was outlawed by Yorkshire for fear of making Sikhs cry or something.
Posted by D. Quail (expat) at 14:03