Nadine Dorries: Yeah but no but yeah but no, we wuz forced to do it 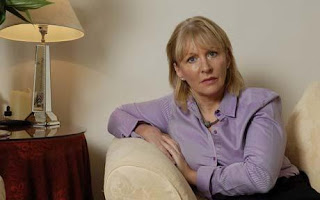 Poor defenceless MPs who have done nothing other than rob taxpayers' of millions of pounds through spurious expense claims are victims of 'McCarthyite witch hunts', and not thieving bastards as previously assumed, popular Tory backbencher Nadine Dorries said today.

The anti-choice, pro-war MP for Mid-Bedfordshire also revealed that ministers had only made claims for expenses such as moat-cleaning and non-existant mortgages because bigger boys at the parliamentary Fee's Office told them to do it. Journalists and the BBC are also to blame, Dorries added, because...er, well you know - um, they...maybe...look, they just are ok?

The Daily Telegraph's continuing expose of excessive expense claims has created an 'atmosphere in Westminster that is unbearable' for long-suffering, underpaid and underappreciated members of Parliament, she said, warning that the newspaper's method of 'picking off a few MPs each day...is amounting to a form of torture and may have serious consequences'. Dorries added that some ministers were concerned there could even be 'a suicide', to which the general public replied: 'Meh'.

The United Nations Human Rights Commission said it had not received any complaints so far regarding inhumane treatment of MPs.

Dorries's latest bizarre incursion into the realms of incoherence and illogicality follows her revelation yesterday that billionaire shape shifting reptiles from Uranus secretly control The Telegraph's editorial direction and the McCarthyite witch hunts are designed to place a rag-tag collection of 'racists, fantasists and has-been celebrities' in Parliament, in the hope of declaring war on Europe after the next general election or something like that.

Responding to reports that David Cameron was forced to 'slap' Nadine about the head for being a 'whackjob', Dorries said on her faux blog that doesn't allow linking to individual posts: 'LoL yeah like whatevs, he so never done that or nothing, The Telegraph's telling porkies innit. Now shut up, I'm off to South Africa while this shitstorm I created blows over, laters dorkz.'
Posted by D. Quail (expat) at 17:15