Carla Bruni and Michelle Obama kiss; Barack and Nic 'ok with it'

But if you squint a bit, and close one eye, and don't look at any of the other photographs, the evidence is plain to see: Carla and Michelle kissed each other - on the lips - in a sensual display of steamy female intimacy behind their husbands' backs in front of a throng of journalists and photographers. 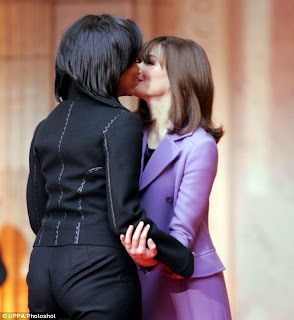 Reports that there may have even been some tongue involved and perhaps even a quick squeeze of the bottom have so far not been confirmed - or denied - by French or American spokesmen.

Rosalind Ryan, a real journalist, acknowledged that the image was simply 'a trick of the camera' thanks to the shot being taken 'at the wrong angle', but decided it would be in the public's best interest to publish it anyway and suggest some sort of inter-racial sapphic shenanigans taking place amidst the otherwise dreary meeting of powerful old men.

It is unknown whether or not Ryan, who has a male surname, is secretly a repressed lover of other ladies and sees latent lesbianism barely managing to control itself from bursting into throbbingly alluring scenes of full-blown lady-loving action in all photographs featuring two or more women not doing anything.
Posted by D. Quail (expat) at 00:51