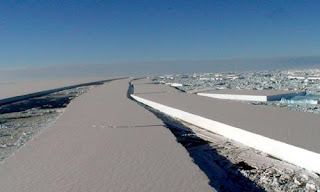 Armchair experts and anonymous critics today poured scorn on ridiculous new 'evidence' suggesting that the world is getting warmer.

Questionable satellite images from the European Space Agency appear to show that a 25-mile-long strip of ice believed to pin the Wilkins Ice Shelf in place has splintered at its narrowest point, about 500 metres wide. 'Experts' now believe that greater collapses may follow, allowing land-based glaciars to slip into the sea - all because of a paltry 5.4f (3c) rise in Antartctic temperatures over the last 50 years.

Suspiciously, news of the collapse comes as penguin loving, tree-romancing delgates from 175 nations are meeting in Bonn, Germany to try to force the UN to ratify a misguided new treaty on climate change which will probably result in tax hikes for millions of middle-class Britons. Evidence of the perilous state of the Wilkins Shelf will be used to 'fuel fears of global warming'.

But commenters were not convinced that the polar ice caps melting would be of any significance to anyone anywhere and highlighted the folly of saving the planet if it means paying 3p more tax every month:

Meanwhile, self-taught scientists derided the politcally correct climate change camp as 'FOOLS' for being sucked in by the great global warming swindle.

Flat-earther Stavely J Benchtatler from Wyoming cited indisputable evidence that an ice cube placed into a glass of water doesn't increase the water level or something, proving with a single decisive masterstroke that climate change is just a big nihilistic fantasy dreamed up by drunken geography students:

Fellow expert of hypothetical deludoscience Andy from Lancashire calmly reminded the class that of course the world is melting because there's a massive nuclear fireball right next door to us duh:

...while simultaneously revealing that Mars is coated in cool, cool ice. Bookies are giving odds of 13-1 of Andy receiving the Nobel Price for Everything later this year.

But it was left to Tony from Buckingham to lay the debate to rest, cooly pointing out that it was the volcanos what did it, you know, those ones in Antarctica like St Helens: