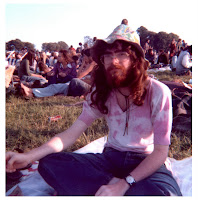 Aren't they just awful? They parade around in their smelly woolen hats, faeces smeared on their faces in protest at whatever it is they've decided is bad for their beloved "Earth" this week (cars and factories are bad apparently - ha!), sleeping with each other like it's the most natural thing in the world as their millions of grubby tots run around licking trees and hugging hedgehogs - they believe contraception is bad for the environment.

They're always smoking drugs too, too busy getting high as multi-coloured crusty kites to realise the hypocrisy of campaigning against global warming while releasing billions of tons of CO2 into the atmosphere from their crack pipes and bongos. Not only that but they drive around in those ridiculous 'shagging wagons', old, polluting VW campers kidnapping middle class, nicely dressed children to put to work on their opium fields. I bet they only drive those rust buckets because they can't afford a nice, big, black BMW like mine. I've had the interior customised with a fluffy trim and a lipstick holder installed in the gear stick - I'm so busy shooting off to important meetings with powerful older men I never have time to do my make-up in the morning. It's gogogo for me! Teehee.

I heard that when those unwashed, bandana wearing grubsters go on holiday, they like nothing better than visiting dirty third-world countries like Africa or one of those Eastern European ones because they're so cheap, and they're really poor because they don't have proper jobs like me. I've actually watched a herd of crusties in India or somewhere stealing sweets from the hands of a poor little brown boy living on the streets, and kicking his bony dog. Scum! I quite like those poor foreign children though, they're so cute with their big eyes and funny little shoes. I've been thinking of doing a Madonna and getting one to go with all my lovely horsies and bunnies. Oh! My millions of glamorous friends would be so jealous! I can only imagine what Piers would say as I turn up for my interview with a little Indian in my Prada handbag. It would be deliciously ironic.

As for those silly-billy Earth Mothers, well I simply detest them. Imagine having children when you earn anything less than £50k like me? It would be squalorous, and is downright irresponsible - these disgusting mothers send their little ones off to school without a hope in the world. I'm sure they're the bullies first target when they see them scurrying around like weavels in their hemp shirts and no-brand plimsolls. 'Haha, look at Bungle there, wearing a poncho! He's got twigs in his hair!', the bigger boys would shout. 'Isn't he a fool!', and they'd all laugh. And I'd be right behind them, pointing, laughing and throwing stones with the the rest of them, because I'm down with the kids. The cool mum. I've heard some boys even call me a MILF, whatever that might be. I dread to think! Hehe! 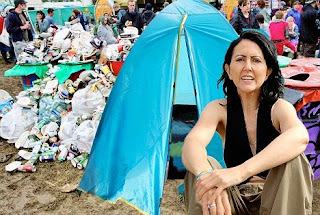 I went to that Glastonbury last summer and the place was teeming with dreadful people who thought nothing of the state of the loos, defecating in little pits outside their tents before wallowing in it and using it as facepaint. Of course, none of them thought anything of allowing their tiny rat children to stand next to the horrible great big speakers spewing out silly dance 'indy' music at 125 decibels because they're all neglectful (usually single) parents. Too busy worshiping their pagan gods and sacrificing goats to notice as their offspring, some as young as three, were mainlining behind the dance tent.

I received lots of odd looks from the crusties as they regarded the square of black bin bag I took everywhere just to stand on, clutching my Prada handbag, scampering around in terror at all the noise and kerfuffle. I think they could tell I was superior and felt envious of my radient loveliness - most people do. And secretly I knew that they all wished they were me, with my BMW and designer clothes, and fashionable adopted third-world child, and horses. The whole silly event was an illustration of the worst aspects of hippiedom: cheap, misguided rubbish dressed up as something soul-enriching, cultural and caring. All it did really was smell.

Unfortunately there were an awful lot of horrid hippies in London last week, ruining any chance I might have had of sharing a nice mochacinno with my famous friends at a funky cafe in the city. We go there sometimes to meet the handsome bankers - since my divorce I spend most of my time on the prowl for a prime piece of well-aged rump to get my teeth into, and there's no better hunting than the Square Mile. But - tsk! - I was prevented by the skankoids waving their poorly painted placards, shouting and making love in the streets, while the brave police battled to keep them away from the lovely rich men, who, I must say looked even more fabulous than usual, all dressed down in chinos and brogues under orders to leave the suits at home lest the jealous tie-dye wearers pelt them with bottles and bricks. I just wish the police had used tear gas on them, at least then some of the scum would have been washed off their grimy lefty faces.

While real people around them were trying to get to work, they set up meditation camps. We all know that meditation is just laziness. How inappropriate, when what we need to get the world on its feet is hard work. Bloody hippies. How is meditating ever going to change anything? Not that it needs changing anyway - it's quite clear that everything is going swimmingly in Britain. I mean, I can still afford my Pret a Manger sandwich each day and a nice smoothie, and I haven't yet had to fire a single servant. I honestly don't know what all the fuss is about.

We don't need anything to change. Everyone knows all you need to do is make yourself as lovely as possible, find yourself a nice wealthy man, and life is peachy. Why is that suddenly so hard to see for all these lice infested free lovers? A washed out Peace sign will never make you attractive to high powered business men. All we need to do is get into bed with them, not smash their windows. That's never going to make you rich!

It's so obvious. Sometimes I find myself amazed that Gordon hasn't called me on my sleek Prada phone to ask me to be a government advisor.