Nearly everybody will die on September 22nd 2012, it emerged today.

In a chilling and factually accurate account of the future, Michael Hanlon, the Daily Mail's science editor, described in graphic detail the full horror of the catastrophe awaiting Britain in just three year's time.

'When it comes', intoned Hanlon, who posesses GCSEs in both physics and chemistry, '[it] will be beautiful at first. Pillars of incandescant green writhe like gigantic serpants across the skies. Sheets of orange race across the horizon during the most spectacular display of the aurora borealis seen in southern England for 153 years.' 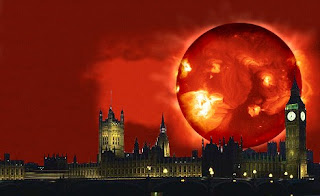 But the stratospheric light show will be little more than a deadly precursor to months of cataclysmic horror as our beloved life-giver, the Sun, begins hurling gigantic globules of white hot plasma towards our innocent planet.

While millions gaze upwards in wonder at the many coloured lights painting trails across our normally grey sky, high energy particles will have already begun wreaking havoc with our electrical grids, leaving vast swathes of Britain without power.

Hanlon, a fan of dramatic page breaks, continued forbodingly: 'By midnight, every mobile network is down and the internet is dying. Television - terrestrial and satellite - blinks off the air.

Radio is reduced to a burst of static.

By noon the following day, it is clear something terrible has happened and the civilised world has plunged into chaos.'

And if the terrifying new revelations seem like the ramblings of a disturbed street prophet with a cardboard sign reading 'Teh ends are ny!' dangling from his neck, think again: Hanlon's evidence is based on an article that appeared a month ago in The New Scientist - a clever person publication produced by real science journalists.

Improving upon the original piece by copying and pasting the first two paragraphs before writing eleven additional enitrely imagined scenes of blood-curdlingly exciting death and destruction, Hanlon described a post-apocalyptic landscape unimagined by the timid mind of the original author: 'By the end of 2013, 100,000 Europeans have died of starvation. The dead go unburied, the sick untreated.'

Although the article as it appears in New Scientist contains no estimate of the cost to human life, Hanlon's forecasts are 'probably accurate', said an insider.

The grim vision follows other real cataclysms that actually happened after being predicted in The Daily Mail, such as the Millennium Bug, a 50ft tall woodlouse that wreaked havoc in several major British cities as it crushed skyscrapers and bridges, scurrying around in search of a giant warm, damp crevice in which to nest, and the black hole created by the Large Hadron Collider which swallowed Earth shortly before it was shut down by health and safety inspectors.

Even more worryingly, the solar superstorm is not without precedent. As Hanlon, who has done his research, explained: 'It is something that has happened before - not that long ago - and indeed has the potential to arrive every 11 years.'

In 1989 a solar flare caused a stream of stellar plasma to enter the Earth's atmosphere, leaving nearly 6 million Canadians without electricity for almost half a day as magnetic storms affected Quebec's power grid.

And although Hanlon acknowledged that, actually, 'it may not happen in 2012' or even 2023, ' the year of the next solar maximum', he recommended that we should all be really, really worried and start stockpiling candles right now.

A scientist said: 'This is not just rampant fear mongering or exaggeration, and won't come back to make the writer look silly when nothing happens in three years because the Mayans predicted the same thing a thousand years ago, and everyone knows they did all sorts of mystical stuff and rode around in chariots literally made by the gods themselves. Do you think you know better than them? No, didn't think so.'
Posted by D. Quail (expat) at 21:43