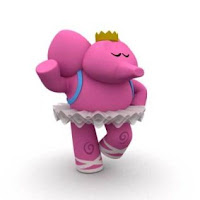 It is barely a month since two homosexual ducks in Sussex came under fire for the thoughtless poovery that left an entire species facing extinction.

Now the selfish lifestyle choices of one elephant have ended up costing a Polish zoo nearly £8million.

Despite having the largest enclosure in Europe built especially for him, Ninio the African bush elephant has expressed his ingratitude to kind-hearted keepers by preferring the company of young boy elephants, while behaving aggressively towards females. Zoo officials fear that the homosexual pachyderm will be incapable of doing proper hetero elephant stuff like lifting heavy logs or fathering children because of his weak effeminate trunk and sensitive skin.

Ninio - whose name means 'child' in Spanish - has already been removed from three other zoos in the past five years for harassing male elephants by repeatedly inviting them over for 'slumber parties' and exchanging his entire allowance of fruit and nuts for tusk-whitening products and family sized tubs of pink nail varnish.

Right-wing Polish councillor Michal Grzes is incandescent with rage at forking out for a 'broken' elephant. 'We didn't pay 37 million zlotys (£8 million) for the largest elephant house in Europe to have a gay elephant live there', he fumed. 'We were supposed to have a herd, but as Ninio prefers male friends over females how will he produce offspring?'.

The intimidatingly named Law and Justice Party, to which Grzes belongs, has been repeatedly criticised for allowing senior members to publically express overtly homophobic views.

But the head of Poznan zoo where Ninio resides said the 10-year old beast might simply be confused as elephants only reach sexual maturity at 14, and that same sex displays of affection between the animals - such as kissing and trunk-intertwining - are common.

A local man said: 'I'm not homophobic, but I wish all these gay elephants would just keep it to themselves. You can't switch on the TV or open a paper these days without hearing about homosexual elephants. I've got nothing against queers - some of my wife's best friends have met them in that Warsaw - but they better stay away from my kids.'
Posted by D. Quail (expat) at 23:28