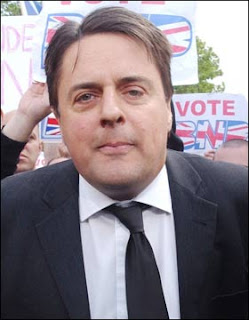 Jowly, slack-eyed, pie-faced hatevangelist Nick Griffin was today given a platform in two of Britain's biggest news outlets to explain the intricacies of his immigration policy and clarify his assertion that brown people are icky.

The Beeb added helpfully: 'The manual describes the BNP's "ultimate aim" as the "lawful, humane and voluntary repatriation of the resident foreigners of the UK"'.

A reader said: 'Well that seems fair. I assume it means illegals, and so long as it's lawful and voluntary, what's the problem?'

Fortunately, more embarrassing sections of the manual that might make BNP members look like knuckle-dragging wannabe stormtroopers were left out of the BBC's coverage - the booklet also contains instructions to hide 'naked torsos in summer, unshaven scruffs or skinhead haircuts (put them in caps or hats)'.

One passage reminds members to always use the party's full name because 'the initials BNP have to an extent been turned into a demonised tag by the media..."British National party" sounds more reasonable and comfortable.”'

The Daily Mail followed this advice, altering the BBC's article to exclude the demonic initials from an otherwise copy and pasted first paragraph. 'British National Party chairman Nick Griffin spoke today of a 'bloodless genocide', it read, which sounds much nicer.

Both articles focused on the fact that Griffin had been forced to defend his comments, presumably from faceless politically correct liberals intent on twisting his words into vile, hate-filled racist propaganda.

Like The Mail, several pro-BNP blogs regurgitated the original BBC piece unaltered, deeming it to be a rather splendid summary of their glorious leader's watertight rebuttal of absurd lefty criticism.

The articles follow priceless coverage generously donated to the BNP earlier this month by The Sun, which described in celebratory tones how the allegedly 'racist' party is now 'Stronger than ever'.

A source close to the Nick Griffin said: 'Wahey! We'd never be able to afford this kind of national coverage, having just spent all our funds on shiny new jackboots and human rights lawyers.'

Alan 'Howlin' Laud' Hope of the Monster Raving Loony Party said: 'Perhaps I should say something as ridiculous as this Griffin fella to get some media love. Our policies are just as silly and yet they get all the attention; it's just not cricket.'
Posted by D. Quail (expat) at 15:59