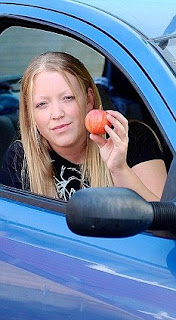 Middle-class drivers, including those with young families and mortgages, are the latest target of faceless insurance companies and unscrupulous traffic police intent on wantonly punishing anyone found 'breaking the law'.

Drivers caught eating an apple, writing a novel or knitting while in control of a vehicle face rises of up to £200 on their insurance premiums.

Over 25,000 unsuspecting motorists are convicted of supposedly 'driving without due care and attention' every year and punished by the courts with massive £60 fines and penalty points on their otherwise clean licences. And many devious insurers use driving convictions for distracted behaviour - so-called CD10 offences - as an excuse to raise already cripplingly high premiums.

The insurance rises are in line with a Government crackdown on supposed 'careless driving', which can also include such harmless past-times as playing scrabble, tuning the wireless or applying make-up whilst driving.

Now ministers are even considering plans to allow police to stop motorists deemed to be distracted and hand out humiliating on-the-spot fines, while other more dangerous - often foreign - motorists drive past pointing and laughing.

Nigel Humphries of the Association of British Drivers said: 'They started upping the premiums for speeding but clearly this is not enough. There is no evidence people caught eating an apple or swigging water and given three points are less likely to do it again. Insurance firms need to produce evidence which shows these drivers are more risky before they hike up the premiums.'

Recent examples of over zealous officers stopping responsible motorists minding their own business include the case of Ediri Tsekiri, a 36 year old researcher, who was stopped by police near her detached suburban home in Liverpool for not being in proper control of her vehicle.

And last month, Gary Sanders was stopped by police in the same city - for laughing while driving.

A driver said: 'It's health and safety gorn mad. You can't even take a quick nap on the motorway now without some jumped up copper accusing you of careless driving. It's just an excuse to wring even more money from us hard done by motorists. The Daily Mail is doing a great job in exposing how silly these accusations of dangerous driving are - careless driving never hurt anyone.'

Although driving without due care and attention has been a criminal offence since 1988, and insurers have levied higher premiums on drivers with convictions or endorsements for over three decades, sources confirmed that it was all the fault of the increasingly prevalent nanny state under New Labour and that Gordon Brown probably loves it.
Posted by D. Quail (expat) at 19:16