While lesser news sources occupied themselves with turgid reports of senior police officers resigning in disgrace (who cares?) and yet more banal stories about the latest poorly filmed video of something happening last Wednesday, it was left to The Mail to address the issues that really mattered - namely: why are fat people so rubbish, and is there a link between obesity and scrounging off the state?, is anorexia bad?, and finally, ha! celebrities have cellulite!

Kicking off the day's hard-hitting round up, the enigmatic 'Daily Mail Reporter' - who may or may not be Julie Moult - sensationally revealed that obese X-Facor contestant Emma Chawner is not only fat, but also unemployed. Her family is also mobidly obese; mother Audrey is said to posess an infinite number of chins. 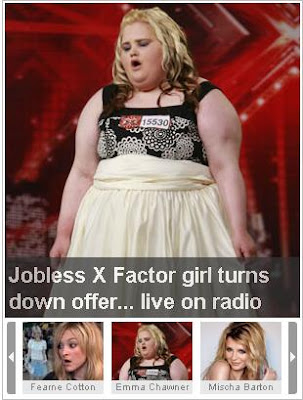 Adding balance to the proceedings, 'Daily Mail Reporter' went on to describe thrillingly how skinny TV presenter Fearne Cotton has become a pin-up for anorexics everywhere. Having pointed out how bad obesity is in the Emma Chawner piece and established the undeniable link between grotesque fatness and benefit-scrounging, Daily Mail Reporter responsibly highlighted the flip-side of the coin - that being too skinny is also A Bad Thing. 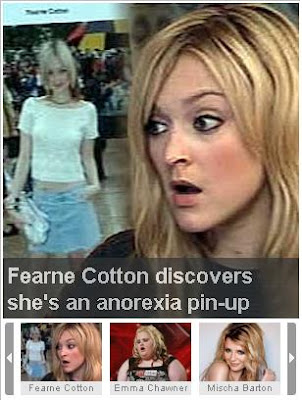 Drawing the triple-whammy of ground breaking journalism to a close, Lizzie Smith told movingly of Mischa Barton's refusal to withdraw from public scrutiny - despite the incessant Daily Mail media obsession over her awful cellulite. Sources said the article wasn't just a thinly veiled excuse to publish pictures of the twinkle eyed, wobbly thighed starlet half naked, but an important contribution to the debate on female self-esteem and how young women should be expected to look. 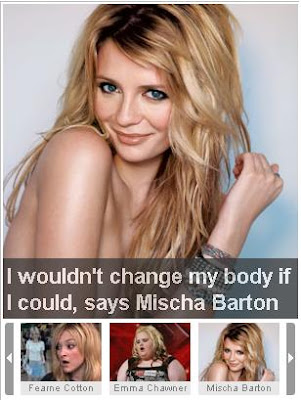 Refusing to conform to other news sites' hegemonious frontpage layouts, Mail Online decided that collectively, these three stories should sit proudly above the mundanity of 'real' news, giving them pride of place on a wizardly scrolling box of delights that dwarfed news of fresh footage of Ian Tomlinson's death and the resignation of Britain's most senior counter-terrorism officer.

A reader said: 'Wow! Look at it scroll - I don't even have to press anything, and the pictures keep moving between a fatty, a skinny celebrity and that bird from the OC! I could watch it all day!' 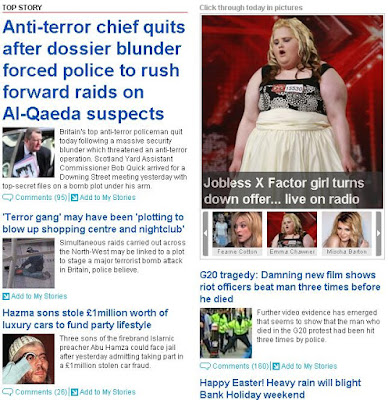