That Budget: What does it all mean? 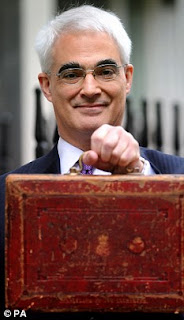 Nobody cares about the sphincter looseningly dull annual trudge through reams of impenetrable micro economics that is the budget.

We hardly need reminding of the inevitability that Alistair Darling and his team of joy-crushing bean counters will squeeze the last few pounds from our already thread-bare pockets for daring to enjoy the delights of cigarettes, alcohol and inefficient motor vehicles - the few remaining joys left to a country crippled by state engineered fiscal ruin.

But, unfailingly, the budget does exactly that. Those with any sense, no doubt, spent the day at the pub getting the rounds in while they could still afford to, smoking themselves into a gravel voiced stupor in defiance of the eye-wateringly steep 2% levy on tobacco. At least the smokers will eventually get their money's worth in treatment from that bloated, cash hemorrhaging tumour on the taxpayers' purse that is the National Health Service.

These endless tax hikes on anything remotely fun are a given, which is why nobody cares. But the important thing about the budget is that it provides a splendid chance to whack Gordon Brown, Alistair Darling and the entire party of gentry hating apparatchiks with a big stick of feigned outrage and mock horror at the hardly revelatory confirmation that some people might have less money than they did last year.

So what fresh economic hell did comrade Darling unleash on this dark day?

First off, the headline grabbing, pinko pleasing sucker punch to the very people who keep our country afloat: a 10% rise in income tax for the selfless men of industry who run our businesses, spend our money and keep the whole greasy wheel turning that we may be have the privilege of borrowing enough to buy a flat and start a grubby, hopeless family of our own. 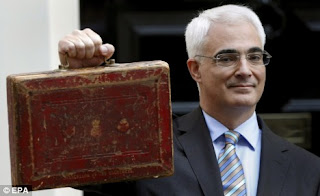 Since the pre-budget report a few months ago the goodly rich had already been anticipating a gigantic 5% hike in income tax. Those earning £150,000 and over started pinching the pennies in preparation, selling off yachts, tearfully waving goodbye to Jeeves and washing their Bentleys when they were dirty instead of buying new ones. Sacrifices of simple hard-earned pleasures were demanded at the altar of New Labour's increasingly Bolshevik regime.

In a budget reminiscent of the bleak days of Old Labour, nothing could prepare the responsible super rich for the coffer hammering income tax hike to 50% that weaselly eyed Darling ended up slapping down on them today, which left some pundits 'fizzing' with rage. What happened to Peter Mandelson's encouraging claim that he 'didn't mind people becoming filthy rich under New Labour'?

While ungrateful proles get off scot-free despite life times of never bothering to earn sackloads of money, dancing drunkenly in the streets with only 20% of their incomes handed over to the state, those who made something of themselves, or had the foresight to be born into already wealthy families, sit weeping in the run down cloisters of once majestic townhouses and country mansions.

As Kirsty Walker rightly notes: 'It appeared to look back to the 1970s when chancellor Denis Healy promised to "tax the rich until the pips squeak''. And squeak they will - figures already show how the treasury hits those who earn the most hardest, while the bottom feeders brazenly revel in proportionally lower taxes.

As if this weren't enough, those struggling by on £100,000 will no longer have the freedom of a tax-fee personal allowance - the first time an entire section of the population has been denied a tax break. Ever. Thanks to the boundless greed of commissar Darling, those finding themselves newly bereft of their allowance will now hand over up to £1,500 more every single year than they did before, while the poor are effectively excused of handing over ANYTHING for a few months. No wonder those call centre operatives and middle-aged sales assistants working in Tesco always look so unflinchingly happy. 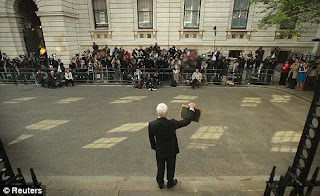 To add insult to injury, the beneficiaries of these punitive anti-capitalist measures can only be described as corpulent white elephants, gorging tenaciously at the shallow pool of public finances, sucking the nation dry of the last few drops of appropriately targeted expenditure that remain.

Like a man trying vainly to plug a gaping wound in the Hoover dam with a pea, commandant Darling will throw some of the money gained from punishing the rich at Britain's mountainous national debt. This is patently ridiculous.

Our country's debt has now reached levels so catastrophically massive that it is meaningless and should simply be left alone. The figures used to measure debt and borrowing are no so vast that they do not even fit across a double page spread in The Telegraph.

Everyone knows that unwashed dishes eventually clean themselves, and the same is true of the economy; left to its own devices, our financial systems would come to realise how silly they've been and just forget about the recession.

Thus the budget's forecast of debt amounting to 80% of GDP by 2015 is meaningless and misleading; within that time frame the Conservatives will rise to power and save us from the financial quagmire by dithering until the whole thing simply disappears.

Equally ridiculous is the £1bn to be squandered on 'the environment'. An absurd £525million is to be wasted on countryside befouling wind farms over the next two years, while £435million will be set aside for energy efficiency schemes in homes, officers and public buildings. Of course, if the Government's hugely expensive asbestos removal programs hadn't been so hastily implemented in the first place, we wouldn't need to be re insulating buildings now. Such lack of foresight is the real reason for Britain's tanking economy.

And pointlessly, an extra £1.7billion will be poured into the Jobcentre Plus network on top of £1.3billion already announced - providing cushy jobs and trendy 'training placement schemes' for unemployable louts under the age of 25 who have been too lazy to work for the last 12 months. According to Mr Darling, some 250,000 jobs will be created or supported as part of these measures, but the question remains: Why should we go to the trouble and expense of providing these yobs with careers when the most practical solution would be to ship them off to offshore labour camps to work for free? Why do they deserve any sort of remuneration for their non-jobs? And surely the real problem is that for every new job created, at least two immigrants come over here and take them?

Indeed, the creation of a system whereby low level jobs are constantly provided and taxed very little will only ever encourage even greater levels of immigration, while our layabout generation of media studies students lack the skills to compete with foreign labour. The better our country becomes, the worse it will get.

In the indisputably insightful words of Floridian commentator Richard Littlejohn, 'we need an election, not a budget'.

All of Darling's measures are too little, too late, serving no purpose other than to rob the middle classes of any remaining dignity and savings, while the poor and the foreign benefit like parasites leeching away at the scalp of our nation.

And remember, while you may not care, or be affected, or even understand the budget, the important thing to take away is that it is most certainly an excellent opportunity to beat Brown, Darling et al with a big stick.
Posted by D. Quail (expat) at 17:56