New Labour was accused of trying to stem Britain's growing unemployment problem yesterday, as it emerged that fully paid jobs are to be dished out to people who don't even have jobs.

The cynical ploy to massage embarrassing 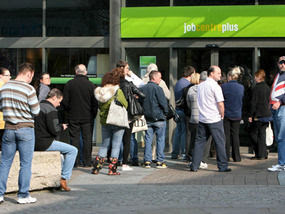 unemployment figures will see TENS of thousands of 'soft' public-sector jobs created in a £1billion scheme to provide work for the feckless. In a perverse attempt to further frustrate the fine traditions of Great Britain a total of 150,000 taxpayer funded jobs are to be created for lazy layabouts, who probably don’t want them anyway - paid for by you.

The scheme, spearheaded by Yvette Cooper, will see ridiculously easy new positions created for meddling Social Workers, Teaching Assistants with cushy holiday entitlement and Carers whose only responsibilities are wiping arses and taking care of society's most vulnerable people.

But critics have branded the move 'indulgent.'

The TaxPayers’ Alliance insta-quote machine seethed nonsensically: 'The public sector has failed to cut back in the recession...soft jobs like Social Workers or Home Carers would be indulgent even in good economic times, let alone in the current climate. When times are tough we have to make sure they are even tougher for the poor and the vulnerable.'

Also: The Mail on the same topic.

The Spectator brands the screamsheets' treatment of the subject 'sneering philistine right-wing pomposity'.