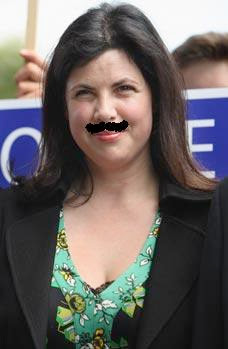 In the good old days, women knew their place, were mindful of their limits, and carried out their duty to be lovely at all times without complaint.

But thanks to today's politically correct climate of tolerance, acceptance, and gender equality, it seems that even midgets, disableds and bearded ladies are allowed to complain about being publicly mocked for the their grotesque - but hilarious - appearances.

And that's just what happened when The Mail published a candid paparazzi photograph of Channel 4 TV presenter Kirstie Allsopp sporting what might sensitively be described as 'a massive f*cking moustache' above her top lip.

The 37-year-old's upper lip looked suspiciously dark and and unless she'd just finished a mug of hot chocolate and forgotten to wipe off the evidence, it appears she is need of some me time.

But Ms Allsopp, who hosts dull property show Location, Location, Location, failed to see the funny side of the harmless pointing and laughing, accusing The Mail of 'pathetic journalism'. On her Twitter weblog internet journal-site, Allsop claimed that her new Italian plumber look was simply a result of hormones 'from the birth of my sons'. Speaking to recovering drug addict Richard Bacon on Five Live, she said she had chloasma, a condition that causes discolouration in the faces of recent mothers.

'I was just gobsmacked', she said. 'It was such a silly, nasty piece. Don't have a go at something thousands of women suffer from after having a baby.'

She also suggested that The Mail was somehow insensitive to feature the story on the same page as an article about a young girl driven to suicide by bullying, before going on to challenge Mail editor Paul 'Darth' Dacre to a fight behind Tesco.

Following the petty furore, Thought Police stormtroopers - possibly working under orders from the PC Brigade - ordered the 'controversial' article to be withdrawn from Mail Online. It is estimated that the frivolous complaint has already cost The Mail approximately 17 visitors and millions of yen in lost revenue.

Fortunately, the image, showing the slumbering lip caterpillar in all its furry glory, is still hosted on MailOnline's servers for all those with an under-developed sense of humour and misogynistic streak to marvel at.

Full text of the original article here.
Posted by D. Quail (expat) at 10:30