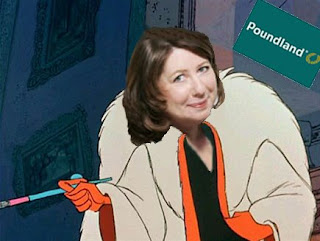 Though some of my readers may not believe it, even I, a high-powered business woman earning a decent wage writing erudite prose for many a national paper and with my perfect family, am feeling the credit crunch.

It was under such constraints that I first heard of the 'Poundland' from one of my servant's cleaners where apparently all items cost only a 'pound'. As we were a little low on Beluga and I needed some new crystal champagne flutes I thought it an excellent idea to pay a visit and incidentally write about my encounter with this strange world as a service to my readers.

Learning that those of an unfortunate background tend to be found in such places I decided to dress low-key digging through my extensive wardrobes for designer clothes that were at least two years out-of fashion, ah the hardships I put up with.

The first problem I encountered was that my local 'Poundland' did not possess any customer parking and I ended up parking in a muncipal car-park and having to purchase a 'ticket' from a vending machine. It then seems that 'Poundland' expects its customers to seek it out and I ended up in a section of the town I'd never visited before with other oddly named stores such as 'Cinton Cards' - presumaby a reference to the former US president - and 'Foot Locker' whatever that is.

Then I found it huddled between an 'H. Samuels' and something worryingly called a 'Superdrug'. I teetered on the edge of entering repulsed by both the glaring advertising with its liberal use of exclamation marks and the shell-suited behemoths trundling past dragging their kicking and screaming children along, but finally I plucked up the courage to enter.

I stood for some time at the entrance until I realised that no assistant was about to present themselves to take my order, apparently 'Poundland' is self-service. It was an oddly liberating experience to size up my own purchases and compare products though I was puzzled as to how I would be able to carry anything especially just after my manicure.

Trying to avoid eye-contact I glanced at my fellow shoppers and realised they were all carrying some type of ghastly rigid plastic container. 'Was I supposed to have brought one with me?', I mused. Not being able to see an assistant around (such poor service) I steeled myself and addressed one of my fellow shoppers trying to pick the one with the least clashing clothes, fake tan and eye-liner.

'Could you possible tell me where I might obtain one of those?', I asked pointing at the basket in an affected commin accent so she could understand me.
'Wot one of dese?', she replied pointing at what appeared to be a constipated Budha ornament.
'No I meant the container', I elucidated.
She frowned at me and I made ready to run in case she pulled out a knife.
'Dey're by der entrance', she continued to frown at me.
I backed off with a frightened 'thank you' and made a beeline back to the beginning of my trek. Sure enough piled higgledy-piggledy were a stack of plastic baskets from which I managed to extract one.

With basket in place I felt much more 'at home' and set off from where I started. At long last I found an assistant identified by some strange cardigan type covering.
'Young man', I asked. 'Where do you keep your Beluga?'
'Our wot?', he said obviously confused
'Your caviar?, I explained.
'We don't do dat we got some fish over der dough'. He waved in a general direction: 'Might find something der', he grunted before returning to stacking shelves.

Taken aback both by his unwillingness to escort me and that a store could exist that didn't sell caviar, I wrote off obtaining any champagne flutes and ended up in what appeared to be a gardening section surrounded by the same constipated Budhas I'd seen earlier. There were also some odd looking contraptions advertised as Solar Lights and tins of paint of some hideous shade 'This explains a lot', I thought.

More wanderings and I start to spy products with names I recognise from watching the servants on the CCTV - Cadbury's and Colgate to name but two. I slip a few of them into my basket something for my children so as they can learn to truly appreciate their own everyday products.

I was stymied by the eggs though. Not a sign of British stamped farmhouse organic just a pack labelled '12 Medium Fresh Eggs'. I wasn't sure I wanted eggs that weren't wholly fresh only medium fresh and forgetting for a second where I was I commented on that fact to my current neighbour.
'I don't know,' said the woman, slipping some Rolos and a pack of balloons into her basket and vanishing in the direction of toiletries.

Giving up I headed with the flow to where it appeared we were expected to pay for our items I wondered briefly if I could persuade them to offer me the contents for free if I mentioned their store in a national newspaper, but decided not to risk it in case the crowd turned ugly, or at least uglier than they currently were.

As I stood in the queue I looked at the contents of my basket and was surprised by how much had found it's way into it. Of course it was all cheap tacky stuff and looking at the bulging contents of my fellow queuers baskets I felt some small pity that for them this was obviously all they knew and all they'd ever know - clothes made from shiny artificial fabrics and toys that look like they're about to be broken simply sitting there.

But I pulled myself together by reminding myself that most of their shopping would be paid for by the likes of you and I - honest hard-working taxpayers.

I finally reached the checkout and would you believe they don't accept American Express!


This Quail was brought to you by FlipC. Cross posted from The Mad Ranter.