The Quail's guide to successful commenting

A number of readers have expressed concern 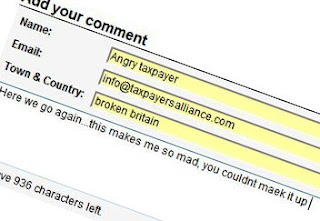 that comments made underneath Daily Mail articles never see the light of day. Many assume that some malevolent leftist force is at work - possibly the PC brigade - working tirelessly to suppress freedom of expression in one of the country's finest newspapers. It's that thought police. Isn't it?

Well, no. Such suspicions, fortunately, are unfounded.

While it is true that getting a comment published on Daily Mail articles is often a frustrating and ethically questionable exercise in futility, it is not an impossible task. Follow a few simple rules and the comment guardians will gladly accomodate your misinformed rantings alongside such luminaries of the commentariat as Cllr Chris Cooke, Dave (expat) or perhaps even the incandescent Jacqui Weems of Southampton.

The first - and most obvious - rule of Mail commenting is to always agree with the article. Nobody likes a troublemaker and, ferchrissakes, there's a reason why these journalists get paid to write this stuff while you sit at home in your dressing gown bellowing pointlessly at the internet with nobody around to hear: the hacks are always right. If they weren't, they wouldn't be working for Britain's most influential newspaper would they?

Secondly, spend some time becoming versed in the vocabulary of the permanently outraged. Angry people who read the Mail identify one another by way of a particular set of linguistic cues, known as 'lazy rage inspired metaphones.' For example, when referring to 'people', Mail commenters divide the species into two distinct subgroups; good people (known as 'taxpayers') and bad people (referred to variously as 'students', 'the unemployed', or 'immigrants'). Our Prime Minister is known as 'MacBroon', and the party he represents is 'Za Nu liar bore' (often shortened to 'ZaNulab' or even 'Nulab') Your comment will not pass moderation unless it adheres to these simple lexical principles. [Study the Daily Mail dictionary if you need inspiration.] 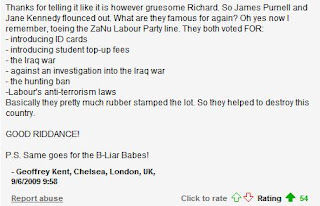 The third rule to remember is that all comments should strike a balance between patriotism and utter disdain for this country. Remember, you love Britain - or you would if it weren't for its geography, the Government, the majority of the population, the weather, and the BBC. These are all shameful aspects of Great Britain that you should mock with vitriol, but you must never criticise the country itself or compare it infavourably to other nations. Only Stalinist Guardianistas do that.

Fourth, bear in mind that everyone else is absolutely insane and the only reason any organisation does anything is to ruin everything and pander to minorities. If you're commenting on a Mail article, feel proud that you're among a very small group of people blessed with the extraordinary ability to see through the liberal fog that clouds the judgement of everyone else on the planet. This especially applies to courts, which only make judgements based on the opposite of common sense - or 'uncommon nonsense' - and scientists, who make everything up simply to grab your tax pounds from irresponsible money-burning Government quangos. For these reasons, use as many exclamation marks as possible in your comments and illustrate your thesis by asking rhetorical questions to demonstrate your inability to even begin to cope with the madness of everyone else.

The above are general guidelines. Specific types of article demand a particular type of comment; when discussing legal action taken by a minority against a company, for example, a race claim, you MUST use the words 'Here we go again!!!' and make reference to the fact the complainant was simply motivated by the prospect of a large cash settlement. Any piece regarding so-called 'global warming' must imply that 'climate change' is nothing more than a Government conspiracy to increase taxes and that sea levels aren't going to rise because if you put an ice-cube in a glass of water and it melts, the water level doesn't rise. Richard Littlejohn's columns require a brief interjection about how he should be the Prime Minister.

It is prudent to quickly discuss style guidelines. Comments that misCapitalise random words, punctuate like a small child with an ellipsis machine gun, insert inappropriate symbols such as '#' and '/', and SHOUT at least one in five words, will stand a far greater chance of passing moderation. The comment guardians pay little due to one's ability to write accurately - poorly expressed views display an admirable passion for the topic, while simultaneously demonstrating that a high school education is unnecessary when the University of Life has shaped your world view.

Study the above carefully and before you know it, you'll have comments published daily. There's nothing like seeing your own inarticulate drivel slouching proudly beside the nation's most misinformed people. 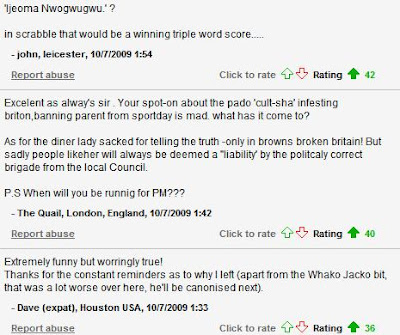