Why you should worry about Camp Godless 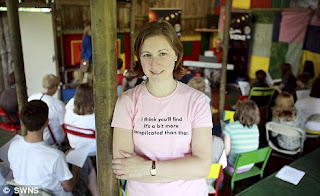 You would be forgiven for thinking the BBC had introduced yet another trendy new presenter for its dumbed down, perniciously liberal 'yoof' programming yesterday.

Suspiciously small, cynically personable Samantha Stein was given excessive airtime yesterday by Satan's favourite broadcaster to promote the latest assault on traditional Christian values. We didn't actually see her on the telly once (Living+1 being The Quail's station of choice) but reports suggest that the state-funded broadcaster gave her over 24 hours of live coverage and allowed her to press the buttons and turn the dials that control Broadcasting House.

So what was this oh-so-fashionable, T-Shirt wearing, possibly single mother doing with our the BBC's valuable airtime? The answer is sure to disturb any responsible middle-class mother.

For Frauline Stein is the public face of 'Camp Quest', a blasphemous take on the much-loved and ever-popular Christan summer camp, where children have flocked to sing Kumbaya, practise flagellation and baptise each other for generations. There are no such japes at Camp Faithless, however: infamous Communist John Lennon's anarchist anthem 'Imagine' is the hymn of choice here, and instead of blind faith, trendy open-minded critical thinking is hailed as the one true path. Unsurprisingly, Britain's own arch-daemon Richard Dawkins is among Camp Quest's sacrilegious supporters, having donated hundreds of pounds and, reportedly, gallons of goat's blood to the cause.

Dark Lord Dawkins, author of the militantly anti-Christian 'God Delusion' book, hissed: 'Camp Quest encourages children to think for themselves, sceptically and rationally. There is no indoctrination', he lied, 'just encouragement to be open-minded, while having fun.' 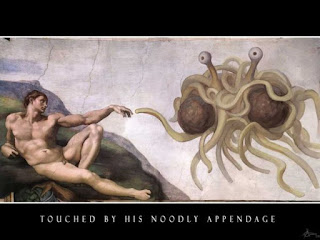 But critics fear that it is little more than an attempt to indoctrinate children with heathen view, closing their minds to the truth and discipline of organised religion. In the past, Dawkins has been accused of eating children's souls and criticised for comments that his own pagan deity, the Flying Spaghetti Monster, will one day best our heavenly Father in a great battle and destroy all non-believers. The BBC are understood to be negotiating live broadcast rights for the noodly Armageddon.

23 year old Stein, the camp director is open about her desire for Camp Godless to warp the spongy young minds in her care. She cackled: 'I think that people are possibly getting tired of the influence that religion has in society, possibly an unearned influence, and trying to come up with alternative things that will instill values that they want to transmit to their children.

Ironically, Stein is currently undertaking a Masters degree in religion and contemporary society at King's College, London. Born and raised in darkest Buckinghamshire, she is one of seven sisters born of the unholy union of a snake and a she-wolf. As Stein explains it, she was raised to 'make up my own mind'. 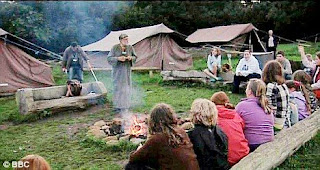 At her totalitarian style camp, young followers are encouraged to take part in such ludicrous activities as 'Hunt the unicorn', where the children are told by Camp Quest's cult leaders that demonic flesh-eating mono-horned abominations have surrounded the site and eaten their parents. The elders convince the children that the nightmarish unicorns can't be seen or touched, and that they will have to devise logical plans for escaping before the creatures can open the gates of Hell and consume the world. Insiders have recounted horrific tales of some children being so terrified that they have spontaneously combusted with fear. A 'winner' - the child that has displayed the best use of cold logic and heartless reason - is given a ten pound note signed in blood by Dawkins himself.

But evidence collected during our own undercover investigations suggests that there may not even be any unicorns at Camp Quest, and the game is just a fiction designed to indoctrinate the children to think 'rationally'. Cruel, I think you'll agree.

Stein explains: 'We are not trying to bash religion, but it encourages people to believe in a lot of things for which there is no evidence.' For this reason, the young Camp-goers also study astronomy, tarot cards, and horoscopes, before being told that such things are merely 'pseudo-science' - at Camp Quest, it seems that anything unsupported by evidence or sense is deemed silly.

The camp has already proved controversial, not least in its implicit criticism of other faith-based children's camps and possible connections with Satanic worship.

'Despite comments to the contrary, they are not indoctrinated,' he says. 'They are presented with Biblical material that they can make their own minds up about and decide whether it is something they wish to consider further.'

The hypocrisy of setting up an atheist summer camp in reaction to the enduring success of faith-based camps is not lost on the Church of England, which accuses Dawkins and his followers of aping religious traditions, in particular with regards to the children's camp. 'We would defend the right for anyone to set up an event like this, as long as the young people are happy to attend,' said a Church of England spokesman.

While we couldn't actually find anyone besides Hammett and the CoE bloke to criticise Camp Quest (and even they didn't actually say anything about it - what a waste of time these bloody interviews are - 'defend it's rights', ffs? You're a man of the cloth for Christ's sake), it is quite clear that the unholy summer resort is facing a growing body of calls for stricter controls and a reversal of its anti-Christian message.

These voices can be ignored no longer. No loving parent could fail to be worried about the horrors residing with Camp [Devil] Quest.
Posted by D. Quail (expat) at 15:00