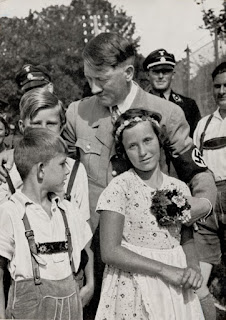 Fury erupted today after F1 squillionaire Bernie 'Grumpy' Ecclestone attempted to pass off the Daily Mail's political ideals as his own.

'In a lot of ways, terrible to say this I suppose, but apart from the fact that Hitler got taken away and persuaded to do things that I have no idea whether he wanted to or not, he was in the way that he could command a lot of people, able to get things done,' he said.

Ecclestone suggested that Ady H was simply misunderstood and tricked into genocide by bigger boys: 'In the end he got lost, so he wasn't a very good dictator because either he had all these things and knew what was going on and insisted, or he just went along with it... so either way he wasn't a dictator.'

He also blamed democracy itself for failing the modern world: 'It hasn't done a lot of good for many countries - including this one,' he said without a shred of irony.

Not content excusing just one of history's greatest villains, the 2ft tall Formula 1 despot went on to praise other ridiculously evil 20th Century icons of wickedness: 'We did a terrible thing when we supported the idea of getting rid of Saddam Hussein. He was the only one who could control that country. It was the same with the Taliban.'

Mail commenters agreed with Darth Ecclestone's perfectly rational sentiments; Jake from London brushed aside Hitler's murder of countless millions of people, and instead celebrated the Fuhrer's bang-on social and economic policies and fight against Communism, whilst justifying the Holocaust:

Les Blakeman from Lakenheath agreed that democracy is little more than corruption waiting to happen and that dictatorships are the way to go, while basement-dwelling professor of Greek language M.O. from London dissected the word itself and came to a chilling conclusion:

Meanwhile, John from Halton nodded sagely in agreement with the Saddam apologism, and Fernando from Vilamoura kept his empathy with Ecclestone's pro-genocidal dictator musings simple:


But the award for best comment of the day went to owner of eye-buggeringly awful website and fan of national socialism BNP supporter Councillor Chris Cooke, who, in a rambling and confused post, praised Hitler's efficiency and ballsy 'to hell with the consequences!' attitude, compared the Nazi leader with the world's greatest Mongol, described David Cameron as a 'Pinko' and suggested that Oswald Moseley's son would be a better Prime Minister than any Labourite political figure (or something):