The tyranny of the gay agenda 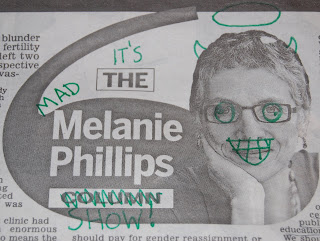 Iain Duncan Smith and his band of super Tories at the Centre for Social Justice are to issue a report which will shape Conservative policy on the family. It is widely expected to put the God-given sanctity of marriage at the heart of family life, make divorce more difficult and promote marriage preparation classes and 'family relationship centres', as well as tax breaks for married couples.

The report comes not a minute too late, following countless years of social engineering designed by Labour to do nothing but obliterate traditional familial values of a mother, father and two children sitting round a stone fireplace telling ripping tales of Grandad's adventures in the Great War.

Four decades of allowing the liberal intelligentsia of both the right and the Left free reign to undo the seams of the nuclear family under the multicoloured banners of so-called 'freedom', 'equality' and 'queerity' have wreaked untold havoc upon Britain. Is it any coincidence that we find ourselves entrenched in the worst recession since the early twentieth century just as David Cameron, or General Pinkochet as he is known in some circles, apologises for Section 28?

High Court judge Sir Paul Coleridge recently observed that family courts are groaning under the weight of cases involving damaged, miserable or disturbed children. In the glory days of yesteryear, when homosexuality was still punishable by a good spanking and a day in the stocks, family courts were of course full of smiley carefree youngsters, untroubled by the uncertainty of when daddy would return from Hampstead Heath or why mummy was wearing trousers and a string vest.

And yet, for years, anyone who drew attention to the fact that gays were ruining the Earth and upsetting Jesus was pilloried as a bigot who wanted to turn back the clock to some mythical golden age. 'Waiting for a real rain to come?', they would sneer at me as I'd snort coffee into my newspaper with rage at the licentiousness of a hotpant wearing pair of queens sashaying past, flaunting their selfish lifestyle choices for all to see.

But those queens have become a symbol for the erosion of family values against a backdrop of family breakdown.

The ConservaTories' admirable desire to restore the holy union of marriage to the rightful centre-piece of the British family is sadly undermined by their suspiciously flamboyant leader's recognition and, indeed, support for 'gay rights'.

A liberal society should be tolerant of gay people – just as it should tolerate the disabled, the obese, and spiders.

But, unrestrained, tolerance can go too far. Surely society would crumble if it were to allow raging homosexuals the same rights as non-perverts; imagine your horror if, for example, you discovered your young son’s favourite teacher was gay, or a lesbian was driving your taxi.

Cameron's apology last week for the Tories' brave attempts to stop lunatic lefty councils distributing gay propaganda in schools provoked widespread scorn - including the gays themselves, who saw it as political posturing to win the fabulous vote.

The truth about the 'gay rights' agenda is that it aims not just to promote acceptance, but actively encourages the idea that gay is preferable to straight; that 'different' is better than 'normal' and 'wrong' righter than 'right'. 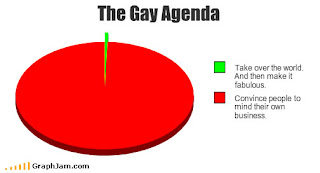 Militant gays claim that 'lifestyle choice' means gay relationships should be treated identically to heterosexual ones.

But the core reason for family breakdown is precisely the view that marriage is merely a 'relationship' for people to choose or not from a menu of destructive alternative lifestyles.

It is not, and here Cameron's absurd fruit-baiting tolerance falls apart. If he were to truly believe in the peerless position of marriage as the best choice for loving families, he would legislate against the amoral 'relationship choices' vying for support against it. Heterosexual couples in a relationship for longer than two years need to be told to stop pussy footing around and tie the knot, while a stern message needs to be sent to the gays to just stop it altogether.

Their vicious selfishness, which manifests itself in the first degree by denying billions of perfectly viable sperm the right to become cared for children in a nuclear family, similarly denies thousands of quite decent women the right to a husband. Thus, homosexuality's assault on the family is two-fold.

Of course, I'm no intolerant, hate-filled, bile-mongering homophobe, but I sense much truth in the words of the Bishop of Rochester, Dr Michael Nazir-Ali, who has called upon homosexuals to 'repent and be changed'.

I'll leave you with this mind-puncturingly logical argument: since Christianity holds that sexual relations should be restricted to a man and a woman inside marriage, aren't those who promote homosexuality and alternative relationship choices upholding their own intolerant doctrine?