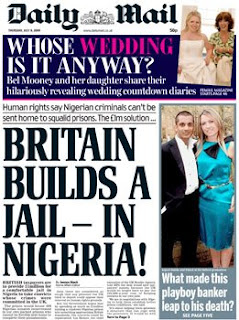 In a surprising U-turn, The Daily Mail said today that instead of being sent back where they came from, Nigerian criminals should remain in Britain to take your job and rob your house.

Confusion erupted as the newspaper more commonly associated with its pro- 'put-them-all-on-the-first-banana-boat-back-to-Africa' stance on immigration also decided it would rather spend more taxpayers' money keeping brown nogoodniks here than save cash by helping to build a dedicated facility in some far-off African land where they could be pleasantly forgotten about.

Currently there are around 400 Nigerian convicts festering in UK jails who can't be deported thanks to absurd EU laws designed to protect their 'human rights'. Amnesty International claims that the country's jail conditions are 'appalling' and extraditions could be successfully fought by arguing conditions are inhumane.

But proposals from the the UK Border Agency would see 400 criminals relocated to a 'comfortable' purpose built facility costing the British taxpayer a staggering £1million. Female chief executive Lin Homer claims that the deal to work alongside African authorities in constructing a prison with 'acceptable' standards would actually save money by stemming a drain on British penal resources. The cost of keeping prisoners in UK cells is £30,000 per year - or £12million per year for a job lot of 400 Nigerians.

Completely ignoring the £11million pound saving to be made, Matthew Elliott of the TaxPayers' Alliance hooted: 'It's an absolute scandal that British taxpayers may foot the bill for a Nigerian prison', before scurrying back under his limpet encrusted rock in a crab-like fashion to look for detritus to feed on.

A confused local man said: 'This is outrageous political correctness gone bonkers. If anything, we should be encouraging more Nigerians to come here to sleep with our wives and claim benefits. I think it's disgraceful that the Government is spending less money while simultaneously easing the strain on our overcrowded jails - especially at the height of a recession. Additionally, I wish the BBC would increase the licence fee.'
Posted by D. Quail (expat) at 22:17