Alan Johnson was slammed yesterday for a seditious and craven appeal to the Socialists who hate our country, as it was revealed that the Union Jack will be completely absent from the new national ID cards. Bureaucrats have admitted that the move was ordered to avoid upsetting groups who may not identify with the UK symbol, such as immigrants, gypsies, and the Welsh.

Trial versions of the privacy eroding card featured a Union Jack in the top right corner, as all official documents should. But new cards have been altered in an attempt to pander to the so-called 'rights' of 'minorities'. In protest, The Sun today submitted its own design for ID cards, pictured below - a marked improvement over previous efforts. 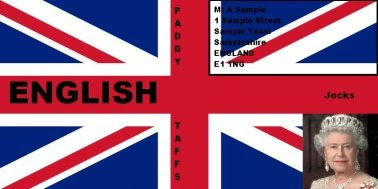 Outraged rent-a-quote UKIP Commander Nigel Farage applauded the decision not to put the EU flag on the card, but said the 'Union flag should be displayed, it’s what Churchill would have done.' The cards, which once featured heavily in Government’s anti-terrorism plans, were thought essential in preventing future atrocities. However, the plan to make them compulsory has since been scrapped.

The Government has been accused of doing nothing more than making loud noises in support of the British people, and this latest fiasco proves it. Future home secretary Chris Grayling accused ministers of lacking pride in the nation’s flag.

He intoned: 'If the Government don’t even have enough pride in our national flag to put it on an ID card that nobody wants then they really are out of touch with the national mood.' Grayling added: 'the British people don’t mind a massive waste of money, so long as it has a flag on it.'

A local man said: 'In a nation of patriots, what sort of National Identity document wouldn’t have a Union Jack on it? This is political madness gone absolutely correct. It doesn't matter that passports don't carry the Union Jack either - I'm too outraged to think rationally right now.'