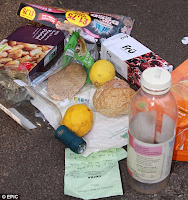 Quality writing, astute opinion and a keen focus on investigative journalism are the raisons d'être of newspapers. Without these, newspapers have nothing to offer which isn't already available online for free. Without these, there is no hope of stemming the interminable exodus of readers from printed news media.

But one newspaper is untroubled by such concerns. Just two days after Sue Reid's explosive examination of migrant worker statistics, The Daily Mail has followed up with a riveting exclusive investigation into the contents of someone's bin.

More commonly known for becrying the Orwellian New Labour nanny state behaviour of local councils for peering into peoples' rubbish, and railing against the 'tyranny of recycling', The Mail today condemned Environment Secretary Hilary Benn for not recycling after dispatching hapless hack Simon McGee to rifle through his bins.

McGee is said to be 'pleased' with the career choice that now sees him rifling through discarded milk cartons, stale bread and mouldy fruit under the cover of night like some penniless, flea-ridden smack-head searching for needles in a dumpster. He told The Quail: 'Well it's better than shovelling shit. No, wait, it's about the same.'

In a statement, Mr Benn explained that he had been out of the country and that his four children were probably responsible for the criminal act of throwing away the recylables. He added: ‘We are regular and committed recyclers, as The Mail could no doubt establish at any other time of the year, but my wife and I have been away.

‘Thank you for drawing this to my attention and we will be having a quiet word with the kids when we get back home.’

Returning to his home, Benn was heard saying to his wife: 'Thank goodness I'm not a journalist. Poor, filthy, bastard.'
Posted by D. Quail (expat) at 17:44