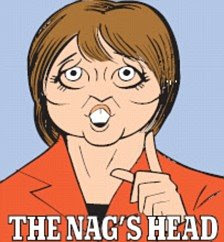 Dowdy lady politician Harriet Harman was embroiled in an unpleasant sexism row today after blaming the global recession entirely on anyone with a pork sword and a scrote.

Labour's deputy Leader - guffawfully dubbed Harriet Harperson by The Daily Mail for her absurd views on equality - said something along the lines of 'if it had been Lehman Sisters not Lehman Brothers there might not have been so much difficulty'. Despite being taken ludicrously out of context and actually said by someone else, the comment proves how much Harman hates men.

The former Blair babe also said she would like to see even more women driving companies into the ground instead of staying at home caring for their children: 'I do seriously think that half the financial service industry is women now. Women make up half the workforce on financial institutions and banks. Why shouldn't they have a say on the boards as well?'

An insider said: 'Well obviously they can't have a say on the boards because they're too emotional. And what would happen if there was a meeting when they've, er, got the painters in? All hell would break loose.'

Instead of a reasonable comment on gender balance in the workplace, Harman's outrageous misandry was interpreted by some as an attempt to shore up public support for her own future ambitions on becoming the first girl Prime Minister since Saint Thatcher of Mags in the good old days. Sources say that, if elected, Harman's first move as PM would be to pass legislation banning men wearing trousers at work, instead forcing them into tutus and having them make the tea. She is also believed to be in favour of introducing towering thrones for female employees, while men are to be provided with small, wobbly plastic stools too low to even reach the desk properly.

But her screeching feminism drew a sharp response from John Prescott, who told her to 'stop complaining' and asked on his blog: 'Why take away from the party the right to choose its leaders on the basis of ability?'

Experts agreed the selection system that gave John Prescott the position of Deputy Prime Minister was clearly flawless and Harman should just shut up and do the ironing.
Posted by D. Quail (expat) at 15:17