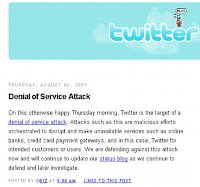 Twitter, the boring interweb micronetblogging website used by bad actor Ashton Kutcher to publicly humiliate his wife and by normal people to talk about their breakfast, mysteriously vanished this afternoon (or so we're told).

For approximately three hours, office workers found themselves with nothing to do but work, as popular advertising tool The Face book also crashed under the sudden influx of Twitter twats desperate for their post-lunch social networking fix. Facebook boss Mark Zuckerburg said: 'Yessss! It's like 2005 all over again!', but half an hour later added: 'Oh f*ck'.

The twoutage also had a significant effect on business: sales of fax machines rose by a reported 700% during the three hour period, while social media experts advised their clients to 'just buy TV ads or something'. Analysts estimated that global productivity rose by 8,000% and declared the recession over.

Experts warned that future disruptions were likely because Twitter is rubbish and could be taken down by a child equipped only with an abacus, and people should delete their accounts and buy newspapers to be on the safe side.

Unknown technology and digital media consultant Colin Sweetman told The Daily Mail: 'It's probably the most common form of attack on a website because you don't need to be particularly bright to have a go at it. It's relatively unsophisticated. Quite often it's a 14 or 15-year-old or a university kid, not a skilled programmer, just someone with a bit of computer knowledge and nothing better to do with their time.'

True to form, the Mail has edited it's original article beyond all recognition now but the link remains the same (the piece is on its third rewrite now - in all fairness, it is difficult writing about stuff you have no idea about.)

Contradicting the Mail's original stance that the twoutage was probably just the work of some teenage nerd in his mum's basement, they now reckon it was evil commie hackers and perhaps even the Russian Government. Sources fear the event marks the beginning of 'Cold War 2.0'.

Commenter Barry from Woking warned: 'the Russians are way ahead of the rest of world when it comes to cyber attacks. if we ever fall out with Russia, they will blow the UK off the internet.'

For some reason, all quotes by, and references to, web expert Colin Sweetman have disappeared.