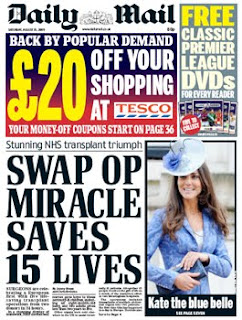 In an astonishing reverse ferret, The Daily Mail decreed today that the NHS is A Good Thing, and not a bloated misery machine intent on worsening peoples' lives and burning taxpayers' money as previously thought.

Readers were surprised to see on the Mail's front page news of a 'Stunning NHS transplant triumph', in which surgeons carried out five life-saving operations using organs from just two donars in a single 24 hour period.

Described as a 'miracle' by The Mail, the story overturns past articles suggesting that organ transplants are only ever given to foreigners coming over here taking our body parts to use in exotic stews. The newspaper more commonly known for revelling in stories of NHS misadventure and malpractice also praised the 'stunning display of team work' and a 'stunning sequence of operations'. A source said: 'We were stunned.'

The stunning U-turn comes amidst widespread anger at remarks made by Tory YouTube celebrity Daniel Hannan on American stupid person TV network Fox News. Talking to the world's most awful person, Glenn Beck, and the USA's whiniest radish, Sean Hannity, Hannan held up the NHS as an horrific example of 'socialized healthcare' gone wrong and painted a chilling picture of Britain as a third-world nation brutally oppressed by state funded medical provision. 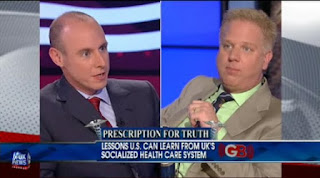 Fox News, owned by arch-villain Rupert Murdoch, who also controls The Times and The News of the World, has been running a series of withering attacks on the NHS as part of a campaign to destroy President Obama's plan to stop poor people dying so much.

But Fox's exaggerated and unjust denigration of a British institution was met with outrage, and a Twitter campaign started by openly Irish comedy priest Graham Linehan using the slogan 'We love the NHS' rapidly became a focal point for people of all* political leanings to express their admiration and support for our national health service. Linehan, who tweets up to 17,000 times a day, told Channel 4: 'Everyone has a story about the NHS helping them in some way. It's important to us, we may slag it off a lot but it's ours.' He also said that Hannan had 'stabbed the NHS in the back'.

With a tide of fury sweeping the nation in reaction to the Hannan/Fox show, The Daily Mail is keen to downplay the fact that Hannan probably got most of his anti-NHS horror stories from them.

The newspaper has previously described the National Health Soviet as 'The Titanic of health care', 'sickly', 'ailing', and 'on the critical list'. NHS hospitals have been described as 'worse than Estonia's', squalorous, 'grubby', and riddled with patient-killing diseases. It has been repeatedly pointed out how Britons are forced to 'escape the NHS' by travelling abroad for health care, while our socialised system squanders money on advertising, bureaucrats, sex lessons for OAPs, and even doctors. Doctors who, let's not forget, 'kill more people than airline pilots' and 'demand' taxpayers' money just to innoculate people!

Key stories expounded by Fox to illustrate the true horrors of the NHS all seem to have, coincedentally, featured in The Mail. Patients making ludicrous long haul trips just to see a dentist, the taxi driver forced to pull out his own teeth, interminable waiting lists, comparitive survival rates, vital care rationing and terrorist doctors have all found themselves used by Hannity, O'Reilly and Beck as examples of why Britain suffers so terribly under the NHS.

An insider said: 'Perhaps today heralds the dawning of a new Mailish editorial stance on the NHS. Either that, or it's a cynical attempt to jump on the bandwagon started by that Linehan bloke on that Twitter.'