Is Haribo corrupting our nation's children?

There's been much mockery of the over-sensitive rantings of fully-paid up PC brigade member, Peter Jones, on the Guardian's Comment is Free.

But Simon Simpkins's outraged missive against the licentious horrors of modern confectionary packaging in today's Mail takes some beating:

The other day, while doing our weekly shop, I bought for my two children, Benjamin and Ofelia, a packet of Haribo Maoam lemon-and-lime confectionary. It was only after I was leaving the check-out that I noticed the appaling illustration on the packaging.

This consists of a lemon and a lime locked in what appears to be a carnal encounter. The lime, who I assume to be the gentleman in the coupling, has a particularly distasteful expression on his face. 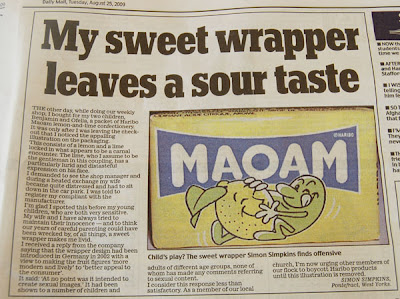 I demanded to see the shop manager and during a heated exchange my wife became quite distressed and had to sit down in the car park. I was told to register my complaint with the manufacturer.

I'm glad I spotted this before my young children, who are both very sensitive. My wife and I have always tried to maintain their innocence - and to think our years of careful parenting could have been wrecked by, of all things, a sweet wrapper makes me livid.

I received a reply from the company saying that the wrapper design had ben introduced in Germany in 2002 with a view to making the fruit figures "more modern and lively" to "better appeal to the consumer".

It said: "At no point was it intended to create sexual images". It had been shown to a number of children and adults of different age groups, none of whom has made any comments referring to the sexual content.

I consider this response less than satisfactory. As a member of our local church, I'm now urging other members of our flock to boycott Haribo products until this illustration is removed.