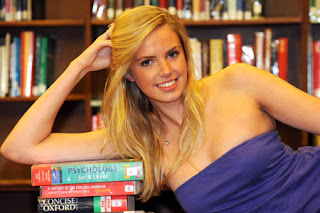 A-Level students were warned not to be too pleased with themselves today, as bitter old people told them they only passed because exams are too easy these days and life after University is shit anyway.

Pass rates hit a record high of 90-something per cent this year, following exactly the same thing happening over the past two or three decades [we're no good with numbers -ed.]. Inexplicably, nearly all major news sources considered this fact newsworthy, with most agreeing that the steady increase in passes indicated that standards were falling, not that kids are getting cleverer.

A source said: 'Conversely, I believe this news suggests journalism is getting worse, while education is in fact improving. If pass rates were to fall, no doubt it would be the students getting blamed for getting dumber, not exams becoming harder.'

Fair and balanced Daily Mail education correspondant Laura Clark, who believes A-Levels are so easy that that they could be taken by chimps, pretended that the entirely expected rise in passes was related to something topical.

'A surge in applications, fuelled by the recession, means that there are expected to be just 22,000 places available in clearing this year', she blathered glumly, ignoring the fact that the situation has been broadly similar since the University of Constaninople opened its doors in 424AD.

Clark added another 1,000 or so more words of turgidly formulaic prose explaining how it all means students are thick, teaching is poor, subjects are dumbed down, and the state of Britain is rapidly worsening because some people take Media Studies.

Other newspapers just saw it as an excuse to publish pictures of pretty young girls.

Surprisingly, a number of commenters disagreed with the almighty Mail, teller of news and bringer of darkness. Martin from the UK said: 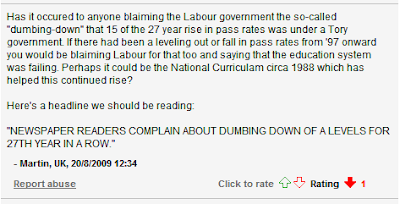