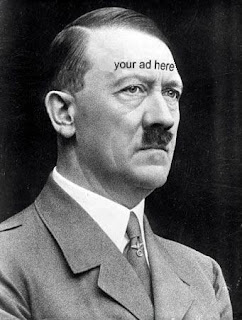 Adolf Hitler's refusal to shake the hand of black Olympic gold medallist Jesse Owens at the 1936 Berlin Olympics has gone down in history as one of history's greatest snubs - BUT DID THE FUHRER REALLY DO IT? Or not do it, as the case may be?

Perhaps we shall never know. But then again, maybe HITLER'S VALET could shed some light on the issue?

If he can't, then we could always try tapping the MI6 NAZI MONSTER for some info. Failing that, HITLER'S GOOD FRIEND ERROL is sure to know.

Ah, whatever. Even if the man 'who got things done' did refuse to shake an Olympic sprinter's hand just because he was afraid of catching dark person germs, we can all rest safe in the knowledge that the Nazis weren't the only one's behaving badly during WWII - STALIN WAS JUST AS BAD YOU KNOW. And Ady did have some frikkin' awesome NAZI PLANES!

All of which leads you to wonder, well, what if the man with the geometric moustache had won the war? What would HITLER'S LONDON look like, for instance? Full of bratwurst stalls, fine beer houses and NAZI GNOMES, most likely. A lot nicer than the AMAZONIAN FATHERLAND, that's for sure! It makes you wonder. Doesn't it?

Huh, maybe just us then.

In other NSDAP news, Leo McKinstry recently wrote of the Bernie Ecclestone 'Hitler would be a great PM' scandal:

The inter-war history of the sport was bound up to a disturbing degree with the rise of the far-right, particularly in Germany, and traits of the outlook remain to this day.

A source said: 'People in glass houses, Leo. Put that rock down.'

Asked why the Daily Mail had run more than 10 Hitler-related stories in the space of two months, an insider replied: 'Yes.'

Image courtesy of Uncyclopedia.
Posted by D. Quail (expat) at 09:30