Son of God tells bloke: 'Get your hands offa my woman, motherf****r' 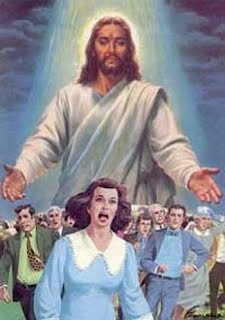 FORGOTTEN music couple Delta Goodrem and her portly fiancé Brian 'Spud' McFadden have consulted security experts and PR agencies after being cyber-stalked on confusing web phenomenon Twitter by none other than the son of God, according to the lager-sodden hacks at news.com.au.

As the celebrity couple flew out of Sydney on a charity tour (Delta Live 2009) yesterday, the usually mild-mannered Jesus was talking of murder and rape on a Twitter stream. He described himself as the 'last new soul of our kind', leading to speculation that it may not be Jesus after all, and could in fact be the second coming of the hardest working man in show business – James Brown.

The threats delighted Goodrem and prompted the celebrities to consider issuing a restraining order in order to prolong the media exposure garnered thus far. The lamb of God is known by the online username 'Savior Mankind' [sic], presumably because @Jesus was already taken.

While the Twitter phenomenon continues to grow in popularity at a rate that far surpasses the security measures in place to protect its users and the learning abilities of scotch-addled tabloid journalists, 'Saviour Mankind' was continuing to profess his love and 'ownership' of Goodrem, weeks after telling her he had saved the world to be with her.

Fearing comment from Goodrem and McFadden would provoke the Twitter-stalker, Goodrem's publicist said the singer's management team was dealing with the issue quietly in the hope it would not inflame the matter, in between commenting publicly on the matter to nationally syndicated new outlets.

We're very much aware of this matter - but we've been advised to not make any comment at this time, other than this comment, her excited representative Jennifer Fontaine said last night.

en, an avid Twitter user since recently learning the alphabet, has unwittingly fuelled the exchange by responding to Saviour Mankind's persistent and frequently threatening Tweets.

At one point the perplexingly anti-Semitic Saviour tried to justify his obsession by asking McFadden: 'How do you explain the fact that Delta lets me follow her and you don't?'

McFadden is reported to be drafting a fourth and final response to the question, thought to be something along the lines of 'Erm…I dunno.'

Mr. Mankind has a number of websites. On one, he states he is schizophrenic and hears voices but still believes himself to be a messiah and thinks Jesus was probably also schizophrenic, which has led to widespread confusion in the news.com.au offices and debate over whether schizophrenia is an actual mental condition or just another one of those social networking thingies.

McFadden responded by googling 'Jewish', 'immediately', 'Spanish', 'inquisition', and 'Australia', then huddled in a corner complaining of a headache.

Strictly adhering to the absolutely-no-comment-apart-from-this-one-and-all-the-other-comments-we’ve-made position being taken by the Goodrem camp, McFadden yesterday tweeted Saviour Mankind: 'You are close to harm! I have your address and if something unfortunate happens to you I will be very sad! Be careful.'

Jesus, or whoever he is, is reportedly trembling in his little internet sandals.

This Quail by Eoinin McAlpine, editor in chief of The Mobar Gazette.
To submit a Quail, click here.
Posted by D. Quail (expat) at 10:00