Under the contentious scheme, children as young as five will be taught that time-honoured traditions of men beating their wives when they take too long doing the dishes or refuse sex because they 'have a headache', are no longer acceptable in today's politically correct, ultra-feminised society.

Shockingly, boys will be indoctrinated that their female friends are 'people' with so-called 'human rights', and just because girls are weak and over-sensitive doesn't mean it's acceptable to punish them for disobedience.

But imaginary critics warned that ministers are cramming the already over-stuffed National Curriculum with silly lessons that should be taught in the home, and schools should teach proper subjects like maths and fox-hunting instead of focusing on the supposed rights of nagging women.

In a pink, fluffy-lined document spattered with the wooly language of Miss Harman's equality dogma, the Government says the first ever so-called 'Violence Against Women and Girls' strategy is already in production by Government departments, and will be ready to make life harder for boys everywhere this autumn.

It squeals girlishly: 'Our vision is a society where women and girls feel safe and confident in their homes and communities...we want to overcome women's and girls' fear of crime and the gender-based violence that they experience.'

Sources suggest that equality-mad Harman is simply bitter at not being given the same opportunities as men and wants to make life as difficult as possible for the male sex as revenge.

In addition to the brainwashing lessons forced upon children by schools, the Health Service's scant recources are to be hijacked to conduct futile studies into how the treatment of women claiming to be at risk of violence can be improved, and police must waste valuable time that could be spent solving real crimes reviewing alleged incidents of 'domestic violence'. 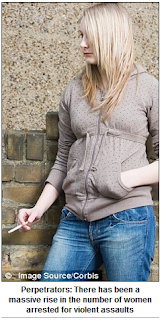 The plans are being rolled out despite evidence showing that boys and young men are more than twice as likely to fall victim to violence, and that it is in fact young women who are becoming increasingly mean: a staggering 25% of all violent assaults in England and Wales are carried out by vicious ladette women, and it is the most common reason for females to be arrested.

The other 75% of violent assaults are thought to be carried out by transvestites and gays, not men.

In a 'blitzkrieg against the male sex', Harman is also understood to be considering plans to make rape even more difficult to get away with - despite recent news that a massive 1 in every 16 rape accusations results in a conviction.

A local man said tearfully: 'Please, won't somebody think of the men? What am I supposed to do when I come home steaming drunk and she won't put out because she's on? Watch TV?!'

Asked why he despises women so much, hate-filled misogynist James Slack - described as 'unlovable' by his own mother - replied: 'I'll never forget how that bitch Sally poked me in the eye in year four. It really hurt.'
Posted by D. Quail (expat) at 13:12