Nobody at the Mail was available to comment last night on suggestions that as much as 95% of traffic to MailOnline is comprised of piss-takers, and that the other 5% is very probably made up of lost web surfers looking for Lily Allen nip-slip pics and Peaches Geldof upskirts.

Moving on to today's Littlejohn word ejaculation, in which he ungeniously compares New Labour to the Big Brother house, and the comments underneath aren't quite as informed as on the hot fruit love piece.

John from Wales says, 'TO QUOTE A WELL KNOWN PHRASE YOU COULDNT MAKE IT UP', while 'grannygrump' from Bolton chimes in, 'To use one of your phrases, Richard, YOU COULDN'T MAKE IT UP!' - both somewhat ironic given that Littlejohn has quite clearly made this up. It's a satire, so it has been literally made up. Even Littlejohn would admit that in the process of writing about 'housemate' Blair and gay contestant 'Mandy', he had to, by definition, make it up. Or do John and grannigrump actually believe that New Labour's base of operations is the Big Brother house?

We were, however, delighted to learn that our own comment was allowed through (without editing this time!) despite getting the columnist's name wrong, expressing our inability to understand the article, mis-spelling 'Nu Lab', using a ridiculous amount of exclamatory punctuation, rambling absurdly off topic, and mentioning that Richard isn't even a British citizen: 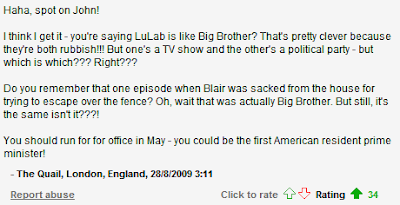 Remember, kids: Littlejohn's columns are still pre-moderated. Someone actually decided that the above would meaningfully add to the debate.

Equally pleasing was to find esteemed comment stalwart Bob Roberts only a few positions above, who braved 242 red arrows to deconstruct 'John's' article rather nicely: 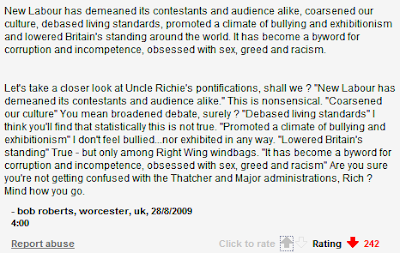