Please get angry at the BBC, go on, please? 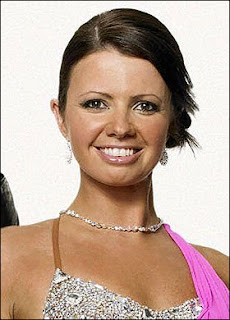 The BBC is under fire from nobody except the Daily Mail and some rambling buffoons on an internet messageboard over the departure of one of the dancers from some dancing show.

Karen Hardy, former champion of inexplicably popular primetime show Strictly Ballroom Come Dancing With Me Get Bruce Out of Here, has decided not to continue in her role of dancing partner to N-List celebrities because her 39 year old knees are beginning to creak a bit. Hardy is to be replaced by another female dancer who happens to be younger than her.

The decision is reported to be 'amicable', and Hardy will be retained by the BBC to work on other less physically demanding projects.

But critics* say the split has left the BBC 'facing fresh allegations of ageism' from The Daily Mail. Despite a headline yelling 'BBC fends off new ageism row', the Mail's TV & Showbiz cretin Jo Clements failed to name anybody who had actually accused the corporation of ageism or who was doing all the rowing.

Asked what her source for the 'allegations' was, Clements put down her crayons and said: 'Some website. I can't tell you which one, and the people quoted didn't give their names.'

An insider at The Mail explained: 'Our new model for proactive reporting means nothing needs to have actually happened for us to say it has. We tell people there's a 'storm', or a 'row', or whatever, people believe it, then join in and - hey presto! - a real storm.'

The storming row follows another Mail manufactured controversy in which 66 year old witch-queen Arlene Philips was 'axed' from the same show and replaced with the younger and more attractive - but unfortunately ethnic - talent vacuum Alesha Dixon.

A ranting loon on the BBC's own Have Your Say forum gurgled: 'NRRRRG I CAN'T COPE WITH CHANGE'

A man in the real world said: 'There is literally nothing I care less about than who is on Strictly Come Dancing, or whatever it's called.'