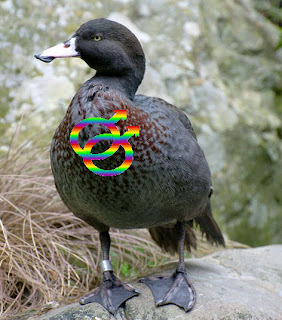 Two thirds of the entire population of blue ducks are facing extinction because of the selfish poovery of male members of their species.

Insiders have slammed the government's liberal approach to homosexuality, blaming increasingly lenient punishments for sodomy and a relaxed attitude to cottaging for the plight of The Blue Duck, or Hymenolaimus malacorhynchos as they are known in ancient Rome - another once magnificent empire that destroyed itself entirely because of its homosexual citizens' penchant for young boys.

Keepers at the Arundel Wetland Centre in West Sussex have reportedly given up trying to force the male ducks upon their solitary female companion after they were observed parading around the enclosure in duck-sized string vests and leather trousers, quacking gay classics such as 'It's Raining Men' and 'I Am What I Am' by Gloria Gaynor.

The three - Ben, Jerry and Cherry the lady duck - are the only remaining members of their species left in the UK, leading to the nightmarish possibility that foreigners may have to be introduced into the population to stave off extinction.

Attempting to make some sense of Ben and Jerry's prediliction for each other and distaste of a normal heterosexual way of life, Centre Warden Paul Stevens explained that Cherry 'is an old girl for a duck' and is probably a bit like the duck equivalent of Donatella Versace.

'In the case of Ben and Jerry it seems that these two were simply not attracted to the female', said a wildlife television presenter who wished to remain anonymous.
Posted by D. Quail (expat) at 23:59