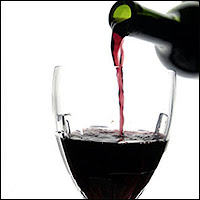 For millions of middle-class Britons, relaxing in front of The Good Life with a nice glass of English Pinot Noir while the wife does the dishes is the perfect way to unwind after a busy day at the office. And according to new research, it could be just what the doctor ordered.

A study has found that people who enjoy a daily glass of wine more than halved their risk of developing Barrett's Oesophagus, a malignant condition that can lead to throat cancer. Poor person drinks, such as beer and hard spirits, were found to have no beneficial effects, however.

Gastroenterologist Dr Douglas Corley said: 'We already knew red wine was good for the heart, so perhaps here is another added benefit.'

The findings come a week after it was reported that wine increases the risk of developing mouth and throat cancer by 168 per cent.

However, that report was undermined by previous research suggesting that red wine reduced the risk of smokers developing lung cancer by 60%. A study four years beforehand had already established that men who drank red wine were 13% less cancerous than teetotallers.

But this assertion was cast into doubt by an earlier study proving that both wine and beer increased the chance of catching liver and bowel cancer by a fifth.

The news overturned previous research showing that red wine reduced the incidence of bowel cancer by 11%.

Only eleven months earlier, misguided Bacchic revellers had toasted the news that just half a glass of wine a day could prevent cancer.

The party didn't last long - six months on, it emerged that wine increased the risk of breast cancer by 50%. The revelation was re-revealed the following month, putting the risk up by an additional 50%.

But vinophiles weren't worried, as a previous article had described how red wine had anticarcinogenic properties and could shrink tumours. Combined with the powerful cancer crushing properties of wine, berry and rice pills, drinkers were confident of continued good health.

However, men were warned last year that while they might be safe from breast cancer, they were likely to be left withered and emasculated by drinking red wine or beer and eating nuts.

And there was no escape for those hopeless drunks who, too terrified to drink a traditional ale or box of cheap wine, turned to mouthwash - that kills you too.

Finally, the restorative effects of wine were confirmed when research found that back pain could be cured by a pleasant glass of Cabernet, while fat people were overjoyed that a red wine pill could let them eat all the burgers they could ever wish for without gaining a pound.

One local man said: 'I just don't know what's safe to eat or drink any more. If I drink wine, I'll get cancer. If I don't, I'll get cancer. I might just stop eating and drinking anything at all.'
Posted by D. Quail (expat) at 19:24