Hirstute Muslim Sues Police After Officers Laughed At His Beard 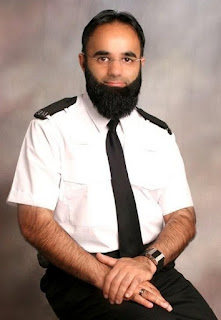 A Muslim police officer with an hilarious - and possibly fake - beard is suing Bedfordshire police force for hurt feelings after colleagues poked fun at his comedy forest of facial fur.

PC Javid Iqbal claims he is the victim of racial and religious discrimination and unfair dismissal, and stands to make up to several millions of pounds if his case is successful - as thousands of white middle-class taxpayers struggle to keep their jobs at a time of worrying uncertainty for British workers.

Iqbal described to an industrial tribunal how, in one supposedly 'offensive' incident, a fellow officer mimicked his accent and pretended to have a beard similar to his, probably because he was envious of it.

Iqbal's case is the latest in a long line of frivolous 'race claims' to brought against Britain's institutionally friendly police forces - in November a Muslim chef sued the Met because he didn't want to cook sausages and bacon, and only a few days earlier Tarique Ghaffur, former Assistant Commissioner of the Met walked away with a £280,000 payout after suffering 'years' of alleged 'racism'.

Top columnist Amanda Plattell described Ghaffur as 'spitting in the face of the country that saved him' for complaining about his treatment.

Iqbal was also called a 'f***ing Paki', forced to walk home from a job after colleagues refused to pick him up, and was the victim of a smear campaign in which eight other officers made a string of unfounded accusations regarding his performance and conduct to senior members of staff.

He was fired after a nine month leave of absence owing to depression as a result of his colleagues bullying.

Bedfordshire Police said he was sacked because 'He was not cut out to be a police officer'.
Posted by D. Quail (expat) at 13:38