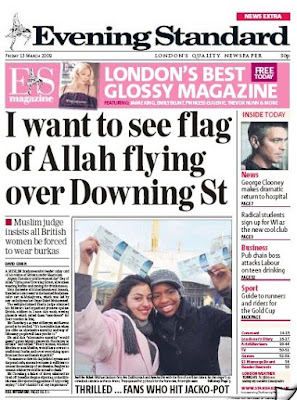 A top Muslim judge yesterday revealed a terrifying blueprint for the complete Islamisation of Britain, expected to begin in the next few weeks pending inevitable approval from New Labour's multiculturalism czars.

Speaking in an exclusive interview with The Daily Mail's London edition, Anjem Choudary - who represents the views of all Muslims in Britain - said that the Islamic Sharia law system will replace Britain's current legal institutions and that 'The flag of Allah would fly above 10 Downing Street'.

We're not sure what the flag of Allah looks like, but it's probably quite similar to those flown on pirate ships and is likely to be beard shaped - unlike traditional flags such as the Union Jack, which are rectangular.

Although many of Choudary's proposals may seem perfectly sensible - in judicial matters, one male witness would be sufficient to counter the testimony of two females, and adulterers would face death by stoning - his methods remain completely unacceptable. The vision of a 'pure Islamic state' could only be brought about 'through jihad', the violent practice of eating white British people whole.

The benefit-claiming 41-year old lawyer admitted that he was behind the mass demonstration against returning British soldiers in Luton earlier this week, labelling them as 'butchers' and 'cowards'. While other high-profile 'preachers of hate' find themselves imprisoned or deported, Choudary enjoys freedom in the UK, taking your tax money to fund his lavish lifestyle of jihad, bomb-making and hate preaching.

It is thought that all Muslims, including so-called 'moderates', hold similar views to Choudary and are desperate to see traditional British institutions such as everything that you like destroyed.

Far from simply being a crazed attention seeking wannabe extremist who thinks that the pope should be executed and deliberately courts controversy by making ridiculous public statements about how cool Osama bin Laden is, insiders agree that Choudary is an important figure who almost certainly embodies the beliefs of anyone with a beard and an aversion to pork.

A source close to the London Mail said: 'The most effective method of defeating militant extremism, encouraging integration and inspiring reasonable debate is to allow proponents of terrorism and organisers of misguided and offensive protests to air their views on the front pages of ailing London newspapers.'

The London Mail's new editor said recently: 'this newspaper takes a fundamentally optimistic view of life, of London and Londoners...We believe that the greatest city in the world needs a cheerleader. As recession bites, we also think it needs cheering up.'

Image courtesy of BigDaddyMerk
Posted by D. Quail (expat) at 14:26