Cbeebies hates you and your children 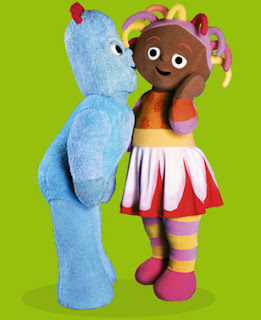 Tot's TV channel Cbeebies is one of the greatest threats to child development facing Britain today, a shocking new exposé has exposéd.

Beloved by millions of under fours across the country, the station churns out supposedly harmless multi-coloured whimsey such as 'Balamory' and the suggestively titled 'In the Night Garden' for hours on end each day.

But, like [Bag]puss from a septic childhood wound, the truth about Cbeebies has finally been uncovered; it is in fact little more than a mouthpiece through which New Labour newspeak is poured into the homes of Britain's toddlerhood, filling malleable young minds with liberal doublethink that encourages an ever-growing acceptance of diversity and belief that working mothers are perfectly normal.

A cynical ploy to indoctrinate children after traditional broadcasting hours is even available in the form of a chilling 'Cbeebies Player' on the state-funded BBC website.

Stay at home mother Laura Kemp was left feeling 'undermined, undervalued and angry' as she sat down to watch the channel with her two year old. 'I never thought good old Auntie would betray me like this', wept Laura as Tinky Winky pranced across her television screen flaunting his questionable lifestyle choices for all to see. 'It [has] become the Government's ventriloquist's dummy by piping out Labour's send-mums-back-to-work mantra.'

The white middle-class journalist continued: 'There are black, Asian and disabled presenters, ethnic dishes in It's Time For Lunch, world music on Space Pirates, yoga and meditation on Waybuloo...But why am I left out - the woman who chooses to care for her own child? In its paranoid desperation to embrace every minority group, the BBC has overlooked the traditional family.'

An onlooker added: 'Truly, the world has never witnessed discrimination so terrible as Cbeebies. Martin Luther King must be turning in his grave.'
Posted by D. Quail (expat) at 01:44