Claudia Lawrence, the Yorkshire woman who went missing in suspicious circumstances over two months ago, was almost certainly a promiscuous home-wrecker with a penchant for married men, the Daily Mail has revealed.

In a lengthy character assassination of the presumed murdered chef, Tom Rawstorne revealed how:

It has emerged that Claudia, 35, didn't visit the Nag's Head simply to take advantage of the house doubles or, for that matter, the pints of cider that were her favourite tipple. What also seems to have attracted her there was the company it had to offer - the men in particular.

She could have made herself vulnerable to approaches from men because she drank too much.

Although Mail journalists have been shaking their heads with collective disapproval since it was first suggested that Claudia may have had a number of past lovers, it has taken until today for the newspaper's righteousness to become truly indignant at the woman police now believe to have been abducted and murdered.

Ignoring numerous friends who have described her as 'not promiscuous', The Mail instead decided that the search for Claudia would be best served by sensationally revealing her alleged affairs with '40 different men.' The claim is based on the watertight testimony of one anonymous 'friend', but, puzzlingly, conflicting reports (also carried in The Mail) state that 'some put the figure at half a dozen while George Forman, a close friend of Claudia's, has admitted he knew about two affairs'. 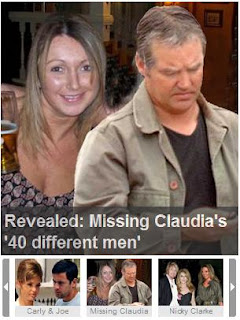 Today's blistering onslaught on Claudia's reputation - promoted on The Mail's front page between coverage of a footballer's marriage and a story about Nicky Clarke's new girlfriend - confirmed her status as a tireless husband thief by recycling anecdotes from lager-sodden anonymous drinkers from her local pub:

"She targeted men in that pub," explains one local. "And the men that she targeted were older than her and were married. At one time, she was seeing several of them, all married, at the same time." Another adds: "We'd all heard what she was up to. A few months ago, I was told that she had lured a man away from his wife and once she had got him she lost interest in him."

The smear piece goes on to mention suggestively that 'Remaining "friends" with her former partners seems to be something of a trait with Claudia', and, condemningly, that she was always 'something of an under-achiever professionally'.

Despite being demonstrably false, it was also deemed appropriate to mention the:

scurrilous rumours that Claudia had been working as an escort girl or using internet dating sites. After all, her £180,000 house was well-appointed and she seemed to enjoy a high standard of living for a chef working in a canteen at the city's university...

Because, well, a cider-drinking attractive single woman with a nice house either has a rich father or she's a prostitute, right?

But, after 2,000 words spent trawling through the allegedly seedier elements of Claudia's personal life, The Mail conceded near the end of the hatchet job that:

the airing of Claudia's private life has not been easy for her family to bear. After the latest revelations about the affair with Mr Horwell emerged, friends claimed it was "poisonous" to brand the chef a home-wrecker who targeted married men.

A local man said: 'Good job Mail, we can't have these murder victims running around getting away with it can we? If it wasn't for your publish-and-be-damned style of investigate journalism, I'd never have known a dead woman led an unextraordinary private life.'
Posted by D. Quail (expat) at 08:30