Nazis ready themselves for return to Europe 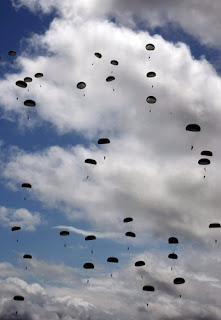 Britain last night celebrated the 65th anniversary of driving fascism out of Europe by sending two fascists to Europe.

The British Nazi Party (BNP) received a total of 948,598 votes - a 6.2% total share of the nation's vote - in Thursday's European Parliamentary elections. It is understood that The Electoral Commission received almost the same number of complaints from voters unhappy that the ink used on ballot papers was too dark for their liking.

Fascist candidates were particularly well supported in Yorkshire & Humber and the North West, where their share of vote was high enough to secure two seats in Strasbourg. The puffed-up racists will look forward to spending more time with other batshit loons like Geert Wilders, the extremist Dutch Ken doll who is banned from entering Britain because of his outspoken beliefs that people who aren't Geert Wilders are dangerous Islamists and ginger people breathe AIDS.

Ironically, the BNP polled less votes in Yorkshire and Manchester than in the 2004 European Parliamentary elections, when they failed to win a single seat. But because of a record low voter turn out, and the fact that not a single person in Britain voted Labour, the Nazi's share of total votes increased by 1.3%, enough to afford them two seats under the EU's absurdly complicated voting system.

However, BNP leader Nick 'Hitler Mk II' Griffin ignored the fact that his cohort of hatemongers only scraped in because of the catastrophic failures of the mainstream parties to actually represent the British population and the general rubbishness of an apathetic electorate, celebrating his phyrric victory as an 'historic achievement' with wobbly jowls and swivelling eyes.

A source added: 'Oswald would be proud of this historical achievement.'

See also: Drink-soaked Trotskyite Popinjays for War for an in-depth analysis of why British voters backed the BNP
and The Enemies of Reason for a round up of BNP voters' reactions to the election
Posted by D. Quail (expat) at 21:46