The Mail's war on IVF 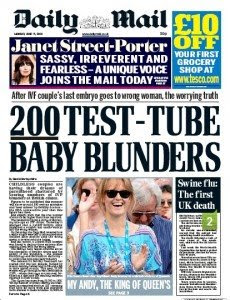 While inferior news sources have been wasting valuable column inches this week reporting such trivialities as a disputed election in some obscure middle-eastern state, The Daily Mail has spent the last few days pursuing a much greater agenda - the tyranny of helping barren couples have children.

Both 'Malignant' Melanie Phillips and Bel 'Looney' Mooney were wheeled out yesterday to wax polemical on the horrors of in vitro fertilisation, following a weekend of eye widening leaders revealing the shocking incompetence at the heart of Britain's IVF industry. Collectively, the Mail's elder matrons spewed an impressive 2,300 words of outspoken diatribe across two full-page articles telling worried readers just why they should be so nervous about the Godlessly futuristic baby making process.

So just why should you be so suspicious of IVF?

Well firstly, as Allison Pearson screamed only two weeks ago, the method allows selfish grannies such as Elizabeth Adeney the opportunity to bring poor infants into the world only to face a childhood of shame as the hands of their contemporaries mocking them for having an old bat for a mother. 66 year old Adeney 'thinks of no one but her blinkered self', spat Pearson after charmingly revealing that the sight of crusty, silver maned Adeney on the front page of The Mail holding her fatherless sprog made her 'shout and hurl the paper across the kitchen.'

So angry was Pearson's rhetoric that several readers complained of bile literally frothing from their newspaper into their cereal as they opened the paper over breakfast. 'I was really annoyed', said Alan from Royston. 'I'd used up the last few bits from the bottom of the packet of Bran Flakes and didn't have another box. I went to work hungry thanks to Allison Pearson.'

But although Allison's disgust with old people having children was generally dismissed as 'a bit silly even for her', she had unwittingly ignited a new Daily Mail agenda. The IVF issue was to explode in a flash of embryonic outrage only a fortnight later.

Alongside a double page spread entitled 'Ten seconds that ruined our lives', Bel Mooney managed to retain her composure long enough to tell readers that having a child 'isn't a divine right'.

Casually mentioning the horror of the white couple who were left with a brown baby after a disastrous IVF mix up, Ms Mooney concluded within four paragraphs that the Mail's recent pearl-clutching coverage of human artificial insemination had raised 'serious questions about the fertility treatment upon which so many couple [sic] pin their hopes.'

'Perilous it is', Bel continued with the gravitas of a 900 year old green Jedi master, before revealing with incredulity that the Human Fertilisation and Embryology Authority recently claimed arrogantly that 'it's impossible to eliminate human error' in IVF processes. And, for good measure, Bel even quoted some science: 'American scientists found that IVF babies were up to 30 per cent more likely to suffer from birth defects than those conceived naturally.'

Realising she was losing hundreds of readers for every percentage mentioned, Bel exposed the dark underbelly of the debate, and why you should really be scared of IVF even if you don't understand what it is:

'Behind all these complex issues lies a more simple question: what has brought so many people to the point where they place a faith in the science of IVF that would once have been placed in God (or at least nature)?', she asked with dazzling use of rhetoric while simultaneously taking it as given that childbirth is no longer entrusted to God or Gaia.

Yes. IVF is Godlessness, pure and simple. Like a journalistic Mormon concerned by the corrupting influence of technology upon our frail but sacred human form, Bel pointed out that 'It's impossible not to worry that we have reached an unhealthy state when too many people believe they have a divine right to a child.'

This is the path to a new Gomorrah, with women running amok, working and socialising to excess, using their bodies for things other than God intended. IVF allows these 21st Century harlots to remain scandalously unchaste for far longer than the holy scriptures ever foresaw: 'Few professional women considering having children until they are well into their thirties...It's as if they are thinking that if they fail to conceive, IVF will come to the rescue.'

Adding political balance to Bel's holy argument, 'Malevolent' Mel Phillips weighed in but six pages later to ask just why, oh why, for goodness' sake, 'are taxpayers' picking up the bill for IVF?'

Unable to believe that Mooney had written an entire article criticising a medical issue without blaming everything on the Stalinist state-funded cash vacuum that is the NHS, Mel quickly elucidated readers that 'the NHS is a health service, not a happiness service', and therefore shouldn't be spending YOUR money on women too lazy to conceive naturally.

The shocking truth about IVF is that it is provided free by a 'Government that controls the purse strings', a bit like how Lenin wanted it. 'What's wrong is that...it's our money, and we should be entitled to decide how to spend it', Mel wept. Her impassioned plea to stop

spending tax pounds on such frivolities as children certainly hit the mark; a recent poll shows 72% of Daily Mail readers in agreement that IVF should cease to be provided by the state. The money would almost certainly be better spent on proper things like Britain's woefully underfunded Trident project.

In case there were any readers left uncertain of Mel's message that cash should not be wasted on ridiculous socialist 'improvement' schemes, she yelled definitively: 'The era of paying central government to deliver public services such as health and education should be declared to be over.'

To allow IVF is to ignore the October revolution taking place under our noses. So blinded are we by babies, and science, and Robert Winston's moustache, that we have allowed the State to take away our faith in God and sperm.

In vitro fertilisation is a dystopian nightmare to be sure. But the last words on the matter must be left to pour forth from Melanie's mouth like spittle from a rabid hound: