Everybody knows that Islam only permits brown people with beards to worship Allah and live in Mosques. 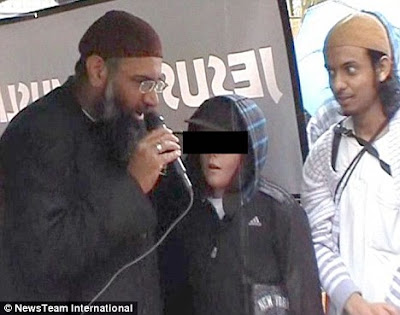 But, as this chilling image shows, fanatic Islamist Muslims have already begun Islamicising WHITE people like you - and even innocent young children like terrified Sean, 11, pictured here being hypnotized by hate mesmer Anjem Choudhary.

Whispering silver-tongued incantations of terror into the bewildered child's ear, Sean appears enraptured by the militant preacher as a frighteningly hatted extremist looks on wide-eyed, ready to prevent an attempted escape with his barbed claws [not shown].

The presumably enforced conversion was filmed during a possibly violent demonstration by Choudary's Ahlus Sunnah Wal Jama'ah group in Birmingham earlier this month.

Choudary, 42, masterminded the massive organised protests at a homecoming parade of heroic British soldiers in Luton earlier this year, during which as many as 20 fanatics shouted slogans such as 'Butchers of Basra' and 'Booo!'

After brainwashing young Sean, the contraversial preacher hissed: 'The child was genuinely interested in Islam. He told us he wanted to become a Muslim and, of course, some people are intellectually more mature than they are physically.'

An onlooker said: 'It was horrible to see a white child considering non-Christian religions. Mind you, he did look like a bit of a chav, what with the cap and all - maybe a bit of Islam will sort him out.'