Griffin upset to find people don't like him very much

British National Party Fuhrer Nick Griffin was forced to abandon a press conference today after angry protesters attempted to make an omelette on his suit.

The fascist leader quickly scuttled away from his spot outside Parliament to a waiting Ford Mondeo, flicking his forked tongue and hissing at the dozens of assembled protesters who chanted 'Off our streets Nazi scum' while pelting him with ovarian missiles.

Griffin had only got a couple of minutes into giving a speech on how mean the British press had been to him and how British Union of Fascists leader Oswald Mosley just wasn't evil enough for his liking.

Protest organiser Weyman Bennett of Unite Against Fascism said it was important to stand up to the BNP: 'The majority of people did not vote for the BNP, they did not vote at all. The BNP was able to dupe them into saying that they had an answer to people's problems. They presented themselves as a mainstream party. The reality was because the turnout was so low, they actually got elected.'

After wiping the yolk from his ironically black suit, Griffin described the incident as 'a very sad day for British democracy' and accused the Labour party of organising the demonstration using 'taxpayers' money.' He added, confusingly, that the he also thought the 'organised mob [had been] backed by all three main political parties' and not just Labour.

Even more nonsensically, he went on to say that actually the mob was self-organised and just didn't have anything better to do: 'They are silly left wing students, lecturers and probably civil service parasites off on their lunch break', he whined, crying tears of acid for his battered white pride. 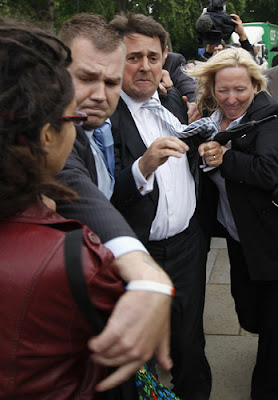