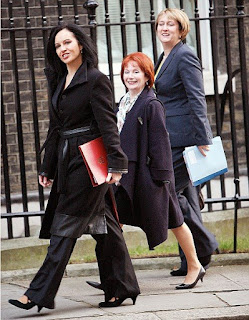 A Machiavellian sisterhood of power crazed women is responsible for Gordon Brown's spectacular downfall, it was revealed last night.

As the Prime Minister squirmed at news of the four hundred and eighty-sixth cabinet minister to resign in a week, fat male fingers were pointed at the unholy ring of so-called 'Women Against Gordon', or WAGs, for hounding the beleaguered Scot to what many pundits are calling a point of no return in Labour's meltdown.

Scheming female politicians Jacqui Smith, Hazel Blears, Beverley Hughes, Patricia Hewitt, Caroline Flint, Margaret Hodge and Tessa Jowell stand accused by The Daily Mail of being 'more loyal to each other than their party', orchestrating a series of 'traitorous leaks' and meeting for sexist 'girls only dinner parties' where they would gossip about male MPs and discuss shoes and other silly lady things.

The mysterious 'Daily Mail Reporter' - lett's call him "Quentin" for the sake of convenience - painted a vividly misogynistic picture of 'months of seething rancour and regular WAGs' whingeing sessions over pesto and pasta meals washed down with glasses of chianti', which eventually 'coalesced into something more lethal - a concerted assassination attempt on the Prime Minister.'

It was like 'The Night of the Long Stilettos,' the anonymous journalist added hilariously.

But more than just twisting the kitchen knife in Brown's already bruised frame, the WAGs have done little other than embarrass themselves, 'Quentin' claims: 'The truth is that all they have left is an undignified loyalty to their own careers'. Hazel Blears' departure was 'petulant and graceless', while Harriet Harman (also referred to variously throughout the article as 'Mother Superior' and Harriet Harperson - hahahaha!) conveys an image of 'treachery in high heels'. Wadabitch.

Caroline Flint, the only remotely attractive one out of the lot of them, will probably be the next 'mutineer', predicts 'Quentin' insightfully. He can tell.

Any why are these awful career woman Mandarins so bent on destroying cuddly Mr Brown and the rest of the political patriarchy that we all love and cherish, instead of staying home to care for the kids?

Quentin provides a subtle but telling clue from Harman's past: twenty years ago she co-authored a policy pamphlet described by critics as a 'a staggering attack on men and their role in modern life'.

Just in case you couldn't work that out, he adds: 'The Sisterhood's revenge on [the male] sex has finally scored a direct hit.' Yes. For women in power, it's all about revenge and undermining poor old men.

See also: UK women politicians not up to scratch, says bookish nerd
and: Polly Toynbee: Another bladdy scheming woman out to get our men
Posted by D. Quail (expat) at 08:45