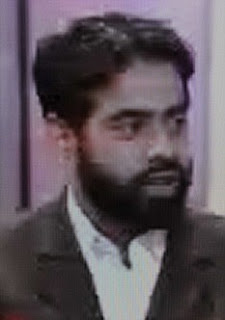 Mulsim treasury official Azad Ali was suspended from his position as President of the Civil Service Islamic Society yesterday, after The Mail on Sunday heroically alerted senior cabinet members that he might be a terrorist.

Ali's 'astonishing verbal onslaught against the Government over its response to Israel’s military strikes in Gaza' frightened the beejesus out of MoS reporters Simon Walters and Jason Lewis, who concluded that he was probably encouraging impressionable young Muslims to declare Jihad on Britain in a weblog post chillingly entitled 'Defeating extremism by promoting balance'.

In the post, Ali, a Muslim, quotes scary-sounding fanatic Huthaifa Azzam who said in a recent interview:

'If I saw an American or British man wearing a soldier’s uniform inside Iraq I would kill him because that is my obligation...This is my religion and I respect this as the main instruction in my religion for jihad'

Walters and Lewis were quick to point out that Ali wrote that there was 'much truth in this'. Although Ali was in fact referring to a completely different quote that contained 'much truth', the pioneering journalists felt that their anti-Islamic agenda was more important to the story than reality, and so duly excluded the quote from Azzam's son Abdullah to which he was actually referring:

These details are of course simply distractions that Walters and Lewis were correct in ignoring: if a blogger quotes an extremist, it automatically means he is an extremist too. Everyone knows that.

Ali goes on to outrageously claim in another post terrifyingly entitled 'We are the Resistance' that our beloved British government hasn't done enough to condemn the actions of Israel in Gaza:

'As the days move on and the number murdered passes the 1,000 mark, we have yet to hear any condemnation from our government'

The Mail on Sunday condemned Ali's opinion as 'a hardline approach using the most provocative language'. A source said: 'How dare these Muslims get angry at the wholesale slaughter of thousands of their countrymen? Just because a few Israeli fighter jets killed some innocent civilians and the rest of the world is outraged at the brutality of this conflict doesn't mean this guy has the right to say it.'

As this post was being rolled from the nest, Julie Moult, an idiot, weighed in with her take on the story. Demonstrating her commitment to researching her subject matter, while simultaneously ensuring that all Daily Mail readers get to enjoy the day's news at least once, Moult 'wrote' an article nearly identical to the one it was based upon. Asked what her sources were, Moult [probably] said: 'I read it in The Mail and just copied and pasted it. Yeah, I get paid for doing that.'

Interestingly, both of the articles referred to in this post have now been pulled from The Daily Mail website. It's almost as if I made them up; who would know? The Mail doesn't allow caching of it's content.