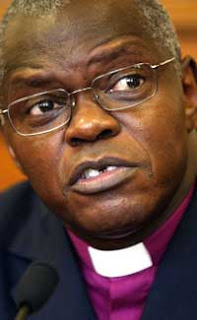 Devout racist Steve Doughty launched another blistering attack on 'the doctrine of multiculturalism' today, blaming the alleged 'collapse of British culture' on dirty immigrants who 'do not belong' and should just go away.

Reporting on a speech given by Archbishop of York John Sentamu, Doughty, who is albino and despises anybody with darker skin than his own, played a familiar tune as he recalled a previous polemic in which he rationally described the multicultural 'doctrine' as defined by forty three fellow racists living in English favellas.

Doughty's joy at a black man spewing what some dissenters labelled 'right-wing intolerant hypocritical ratshit bile' was palpable, as reports from Northcliffe House suggested that the junior reporter had to be physically restrained after sprinting naked about the Daily Mail offices spraying on colleagues' desks, screaming, 'Ha! A black immigrant Church man agrees that all immigrants are bad, deny it now you wooly-minded hippies! Who's racist now bitches?!'

Sentamu said the failure of migrants to integrate was entirely responsible for 'broken Britian' and a post-imperial national lack of of direction. It is thought Sentamu formed his well-considered views after spending an entire day trapped under several hundred copies of The Daily Mail, The Sun, The Express and The Telegraph after tripping over in a WHSmith's.

The acolyte also called for recognition of the Christian heritage which once bound the nation together and for a revival of the civic values once represented by a myriad of local clubs, societies, associations, churches and trade unions and weepily added: 'As the winds of change were blowing the British Empire away, the United Kingdom was rapidly becoming what has come to be termed a multicultural society'. Critics who pointed out the vacuity of Sentamu's metaphor and his bizarre sentimentality for an Empire that forcibly subjugated and colonised his own country were told to be quiet because he is a man of the cloth and knows better than some silly old PC charlatan.

His holiness graciously admitted that Jews escaping from the Holocaust to settle in Britain were OK because they assimilated well and didn't look or sound that different. They acted like awe-struck and eternally grateful guests in the fine country house that is Britain, until the 1950s when they couldn't blame some imagined genocide for their influx anymore and began behaving less like guests in a grand manor, and more like heroin addicted squatters in a delapidated one-night cheap hotel ---- of moral bankruptcy and transgressive decay.

Sentamu went on to remind anyone who would listen of the importance of 'the strong Judaeo-Christian heritage which has shaped our language, our laws, our education and our hard-won civil rights' and which compelled us to embark on The Crusades. Those weirdo other religions that worship, like, elephants and seven-breasted spacement were responsible for diluting Britain's proud religious tradition, which has seen such high-points as witch burning and heathen killing in the middle-east, he possibly added.

Oddly, the preacher finished his diatrabe with a message of apparent good-will, warning that '[Britain] flounders if it does not allow for participation, involvement and commitment from individuals and communities'.